Ladies and gentlemen, look at Kong, the Eighth Wonder of the World.

Pix--of Pix's Origin Adventures has made an astonishing discovery about Wing Commander's prehistory: Chris Roberts' first game, printed in the April 1983 issue of BBC Micro User. It's an arcade game called King Kong based on the famous movie. The player flies a helicopter which must rescue captive women and then shoot the great ape. Roberts wrote the game when he was just 14 years old. It was released as BASIC code printed in the magazine which you could type in and then play. You can read more and even try the game itself here.

Not every design gets to be a massive dreadnought or cutting edge fighter. FekLeyrTarg's latest WC2 data capsule design isn't particularly fancy, but without the data capsule, what would you use the Broadsword's tractor beam for?! (besides ejected pilots) 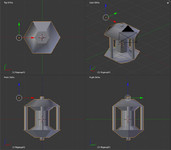 I'd like to let you know that I've posted a picture of my Data Capsule model in the WC2Remake/Enigma 2666 Thread. It is pretty much a simple model.