BREAKING NEWS: Is a New Wing Commander Already In the Works?

Wing Commander creator Chris Roberts shocked fans everywhere three weeks ago during an interview with G4. In a quote now etched in Wing Commander message board signatures everywhere, he announced of Wing Commander that "I feel re-energized, and I think I can come back... and push forward parts of the industry in terms of narrative and cinematic storytelling." The million dollar question was immediately: was he just talking about his hopes for the future... or is a new Wing Commander game already secretly in development?

The question sounds like the stuff of conspiracy thriller novels... but some strong evidence now suggests it may actually be true. Longtime contributor Banjo points us to a an April, 2011 article in the Detroit News about potential tax breaks for film and game projects in Michigan. It quotes a Chris Roberts of "Bl!nk Media International" as having expansive plans for game development in the state (or Quebec, should funding fall through.)

Is this our Chris Roberts? It's not an uncommon name--Wing Commander III even had two Chris Roberts' on its development team! A check of LinkedIn, however, confirms that Origin Systems' star developer now lists himself as "Chief Creative Officer of Bl!nk Media International." So: what is Bl!nk and is this project a Wing Commander game? It seemed like a dead end... until we were given this (unfortunately poor quality) scan of an infograph included in the print version of the Detroit News article:

Look at the the third line. Listed only as "Video Game" is a project exactly matching the numbers quoted about Chris (112 hires, 31.1 million dollars). Then, in the last column, under "scheduled project actors": Mark Hamill, Malcolm McDowell, Tom Wilson, John Rhys-Davies.

Remember that no announcement has been made. However convincing may seem, it is all circumstantial evidence. It's possible Detroit News decided the list of actors themselves, based on Chris' history. Keep in mind also that the article is five months old and that it is discussing plans rather than anything that had yet been financed. But at the same time, that means it predates the G4 interview. IF Chris Roberts was planning a game with the Wing Commander III and IV cast in April and then telling G4 he hoped to revisit the franchise soon in August... at the very least, the direction seems like good news.

TVShowsonDVD has more details about the Wing Commander Academy DVD release that we announced last week! They report that the set will be distributed in the United States by First Look Studios/Millennium, LLC with a $24.98 suggested retail price. There's also a new description and '3D' cover image:

The set should be available for preorder at US retailers next week; eager buyers (and Canadians) can go ahead and place their order with Amazon Canada.

More Ultima! GOG has released a package of the Ultima series' middle trilogy--Ultima IV, V and VI for just $5.99! You can purchase a copy here. This is exciting news for Origin fans everywhere. Although Ultima IV was already free, it's still included in this package! All three of these games predate Wing Commander, so there are no great references... or are there? Check back today, as we run a number of updates connecting Ultima V and VI to the Wing Commander saga! (And, as always, be sure to check Ultima Aeira for serious celebratory Ultima updates!)

Chris Roberts In and Around Ultima V

Ultima V is actually Chris Roberts' first credit at Origin Systems! His role in the project was largely support, but he was listed as one of the game's designer in the finished release. Following Origin tradition, players can actually find and interact Chris in the game itself! He appears as a farmer named Christopher (aka "Dibbs") in West Brittany. Here is his full conversation tree--which culminates in his explaining that he's working on something called Times of Lore... the first game he released at Origin!

Christopher
You see: a dashing young farmer.
Christopher: G'day, {name}!
Player: job
Christoper: I fiddle in the fields to keep me fed.
Player: dibb
Christoper: I see thou hast been speakin' with Phillip.
Player: phil
Christoper: He's me mate!
Player: mate
Christoper: Friend.
Player: fidd or fiel
Christoper: I pride myself in a job well done, even if one does not enjoy it.
Player: enjo or job or done
Christoper: What I really enjoy is writing works of fantasy.
Player: writ or fant
Christoper: I'm currently working on an epic called 'Times of Lore!'
Player: time or lore
Christoper: I hope to have it published soon.
Player: soon or publ
Christoper: Through Origin, of course. Wilt thou buy it?
Player: (any)
Christoper: Then I'll be of little help to you in the future!
Player: y
Christoper: Good! Enchanted, I'm sure, to have met such an enlightened soul. What a nice chap thou art.
Player: bye
Christoper: Ta, mate. 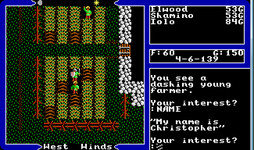 Changing the Face of Ultima

Christopher--and Times of Lore--would get the last laugh. When Richard Garriott redesigned the Ultima interface for Ultima VI, he based the streamlined user interface on the one used in Chris Roberts' recent hit! Shay Addams' The Official Book of Ultima records: "But the most sweeping change would appear in the interface. Influenced by the icon-based interface of Chris Roberts' Times of Lore, Garriott streamlined Ultima's 26 commands into ten icons, one of which was new. In previous games you would "ignite" a torch, "jimmy" a lock, and so on; the new "use" commands could be used for several such actions, reducing the necessary number of commands for the player to master and simplifying the design work." (pp.83-84) You can see the change below--a great early example of Chris Roberts' cinematic sensibilities changing the face of gaming. 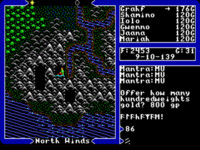 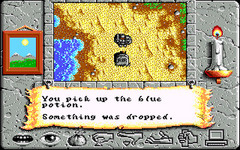 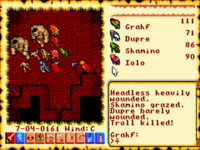 It turns out a pair of Ultima V/VI characters are also TCS Tiger's Claw fighter pilots! If you boot up Wing Commander I's arcade TrainSim, you'll see a list of other players and their high scores. Two names that may appear are "Sutek" and "Seggallion"--who are both NPCs in Ultima V and VI! Sutek is a mage in Ultima V who loses his mind in Ultima VI. In Ultima V, Seggallion is a retired pirate... and in Ultima VI he is a knight from another world trapped in Brittannia who can accompany you in the game (going even further back, he originates as the main character in Origin's Knights of Legend). For good measure, a star in Wing Commander I's Vega Sector map is also named Seggallion! He gets around. You can learn more about both characters (including information on their appearances in other Ultima games not yet available via GOG) at the Codex of Ultima Wisdom. 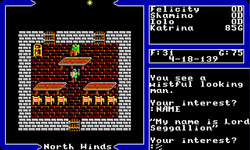 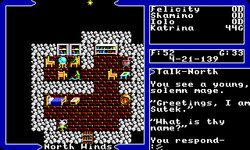 A Match Made in Heaven

This isn't the first time Ultima VI and Wing Commander have lived together! As early as 1991, Origin had the idea to bundle the two titles together in a single value-priced release in the hopes of cross-pollinating between fans of both franchises. An Ultima VI/Wing Commander package was even one of the first CD-ROMs put out by Origin, and it went on to be re-released multiple times through Software Toolworks. These releases were especially cool in that they came in a full box and included all the manuals and artifacts. 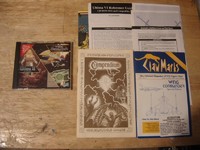 Aren't You the Guy from Ultima?

Chris Roberts wasn't the only Wing Commander veteran to work on the second Ultima trilogy. In fact, we've run the numbers and nearly two thirds of the Wing Commander I team actually worked on Ultima IV, V or V! Here's the full list: