WC vs. History: Striking While the Eisen is Hot

It goes without saying that Wing Commander's history is very Anglo-Americentric--it's full of characters whose ancestors fought for England and ships that are named after great American battles and so on. These references are also very 20th century-based--to the more modern wars much of Wing Commander is patterned after. We will look at plenty of that in the future, but today there is a little reference that manages to defy that trend that should be highlighted.

Written into the Wing Commander IV novelization by Ben Ohlander is something very interesting, mentioned only in passing when Colonel Blair reunites with his former captain:

Blair recalled that it had been Eisen who had met him upon his arrival on board the TCS Victory. "This seems like deja vu," he said, "except this ship is much nicer."

"Home, sweet home," Eisen replied. "Welcome aboard, Chris." He grinned again, a fierce warriors grimace that showed Blair what Eisen's Zulu ancestors must have looked like while they were slaughtering Englishmen.

What is being referenced here is the 1879 Anglo-Zulu war (Wikipedia)--and more specifically the opening Battle of Isandlwana (Wikipedia) in which over 1,300 British troops fell in battle against a Zulu army. The defeat was a shock to the British--their organized force of modern rifle infantry and artillery was soundly defeated by a Zulu force armed only with spears and shields.

If you would like to know more about the battle, British Battles features an overview of the battle along which includes an excellent collection of paintings and photography. 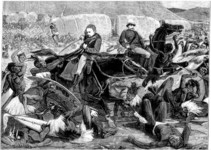 Killing is killing, hot-blooded or cold.

It's somewhat unique to see The Price of Freedom establish this aspect of Eisen's family history. It's a great contrast in the fiction itself--Eisen spends the story (and Wing Commander III) butting heads with Tolwyn, a character who both values his British martial ancestry and who believes his superior weapons technology will render him indestructible to Border Worlds 'savages'.

Finally, it's worth noting that unlike Tolwyn's background, this was certainly not something written into the character from the start. Unlike Andrew Keith, who wrote the Heart of the Tiger novelization based only on the script, Ohlander would have been familiar with the returning actor cast as William Eisen (Jason Bernard). The Wing Commander III script describes the character as "AN AFRICAN-AMERICAN IN HIS 50’S WHO HAS DEVOTED HIS LIFE TO THIS OLD TUB AND ITS CREW" and the name Eisen is actually a German word (which means "iron"). Finally, for an American audience the name and the man likely invoke another beloved commander who fought his war from behind the lines--General Dwight Eisenhower.

Little of both, I suppose.