The August 2010 issue (#112) of the Official XBox Magazine features the space sim DarkStar One on its faux-cover. The full page advertisement glued to and made to resemble the actual cover includes the text "Wing Commander & Starlancer have a love child - finally on the XBox 360!" which is the most Wing Commander to appear on the cover of OXM since 2007. The game itself just came out in Europe on June 18 and makes its way to North American stores on July 20. 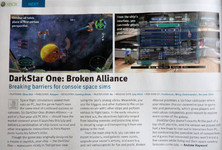