Aaron Thomas has finished his improved Tallahassee class cruiser. These images don't quite represent the very latest LOD models, but they're still super impressive. Aaron will be cooperating with TonViper in the future to more efficiently revamp the WC4 Homeworld 2 Mod. Both talented modders are already fast workers, and this should help speed up the debut of a full version 2.0 of the project quite a bit. 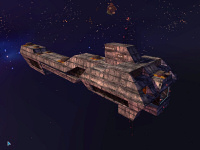 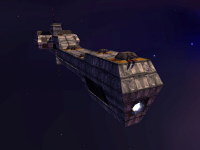 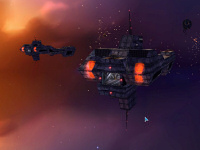 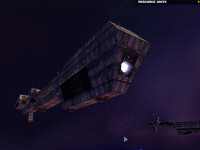 This is the Star*Soldier gloss for the Nephilim page:

CONCEPT: I have been dreaming about this image for years - I even have a drawing of it that I did as a kid, with the Wing Commander I ships. It comes from a British plane spotting poster from the Great War which featured all the fighters at the top, the bombers in the middle and then huge blimps and Zeppelins at the bottom. I've always thought it would transition perfectly to Wing Commander, with capital ships replacing the ligher-than-air stuff. There's a copy posted at the Air and Space Museum in Washington DC and I should really go take a picture the next time I'm in town because I can never find exactly the one I'm thinking about online.

Obviously, we fudged it somewhat since everything else in the manual suggests that the Nephilim War has ended... but I had to include this, I just had to. For the images we colored Wing Commander Prophecy VDU images -- and as many have pointed out we tried to add a few new ships for variation (it was tough to do, though, and still keep the poster meaningful - I assume the Nephilim have a lot of new hardware that isn't on here). Note that they are to scale in their individual groupgs. I'll identify the ships (row by row) in the comments. While we did name the new designs, consider what I tell you 'unofficial' since it doesn't appear in print. REFERENCES-