JasonRocZ has released yet another new Kilrathi ship for his Collateral Damage Secret Ops mod project. This is the famed Vaktoth heavy fighter, which made a pain of itself throughout Wing Commander III (and an object of slight pity in Wing Commander Prophecy.) These are all amazingly well done and they arrive faster than light... but I'm looking forward to seeing elements of this project beyond just the ships. The Vaktoth is available in both original (left) and stylized (right) versions: 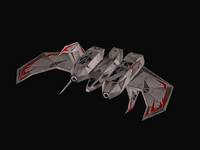 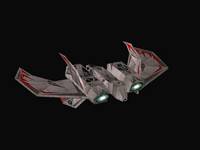 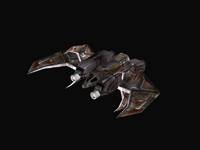 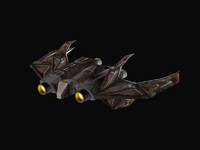 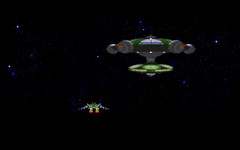 Wingnuts are playing through the whole series again and posting their battle accounts to the Forums. The community replay of Wing Commander 2 is now entering its fifth week. This week covers Enigma missions 1-3. Lorien recalls Tesla:

Two weeks later, the Concordia jumps into the Tesla system. The time has just flown by and Sparks comments that she hasn't seen me much lately. I'm really coming to appreciate her no-nonsense approach to the situation as she checks to make sure the thing with Angel is for the right reasons and re-assures me about my importance to the Concordia. After all, Tolwyn hasn't sent me home yet.

Today's mission promises to be an exciting one. There's a Kilrathi listening post in the system and we're to take it out using the single torpedo on an Epee. Delivering a torpedo run in the fragile Epee will be a challenge, but I'm up for it. No, wait, that's someone else's mission. Instead I get to patrol the system with Stingray. Yay. We set off in our Rapiers to find some Jalkehi in the asteroids, I still don't like dogfighting in asteroids but the Jalkehi like it even less. Nav 2 contains a suprise, a Free Trader being bombed by Grikath. Stingray engages one as I swoop in on another in the middle of a torpedo run. My shots arrive just as the torpedo drops off it's mount and detonate it, taking the Grikath with it. Stingray and I double-team the remaining Grikath with Stingray claiming the kill. The Free Trader turns out to be Paladin's Bonnie Heather and we escort it back to the Concordia. No doubt something big is happening. Angel seems distracted as well, keeping herself busy in her work.