Who Ordered The Extra Wings?

JasonRocZ has added another pair of Arena ships to his Wing Commander: Collateral Damage mod project -- the Dralthi Striker and Shank varieties.

Well while working on the Charon, I also figured that I was working on far too many confed, and the like. So I figured I should probably start working on some of the Kilrathi ships. which by the way is much harder for some reason of another. But here are 2 ships that I've been working on. Both haven't gotten to the vision engine yet but will in due time. These are renders of the ships. Which I've tried to stay true to the Arena type shapes of the fighters. 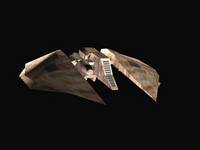 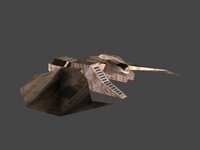 The first is the Shank type fighter. I'm still working on the cockpit area and also on what seems to be the intake/engine areas too. Then I'll start working on the textures more and more. The second is the Dralthi Striker, which is basically the same as the shank minus the extra wings. As always leave comments, and I will take them into account while making any changes.

Jason followed up on this with screenshots of the same designs, as they appear in Prophecy's Vision engine. More pictures are available here. 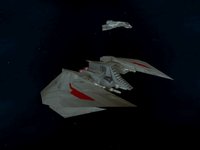 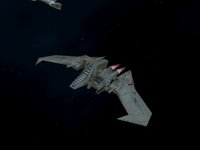