Stick It To Me

LeHah has sent along the first picture of the upcoming Xbox 360 Flightstick/Throttle Combo. This setup will be included with a special edition of Ace Combat 6, which is currently set for a November release. It will retail for $149.99 and can be pre-ordered in brick-and-mortar stores now. Picking up one may very well enhance the Wing Commander Arena experience... though, hopefully, Arena will have been out for a while before these show up: 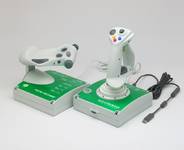 We Were Young... So Ambitious

Today we offer you a brief look back at the community's long history - with a collection of four IRC logs from 1996-1997. These are Q&A sessions with Richard Steinberg, who was Origin's PR man in the mid-1990s. Richard was a great guy who was always happy to answer questions from Wing Commander fans or take the extra time to moderate Origin's Official Wing Commander Chat Zone (a spiritual precursor of our own forums and the reason they bear the name 'Zone' to this day). He left Origin in 1997, and most of the information included is now trivial... but it seemed like a reasonable tribute to a good man. You can read them all here.

<Tackion> I think privateer 3 is going to continue priv 1
<ORIGIN_PR> Tackion: That's not necessarily true
<ORIGIN_PR> What happened is a Privateer 2 was started a ways back by Chris.
<ORIGIN_PR> It was still in development. Chris has of course left. In the mean time
<ORIGIN_PR> Erin had been developing a game

I often wonder what happened to many of these IRC nicks - they were good people, and many were close friends once upon a time. It's hard to believe this was over a decade ago - everyone is grown up now. Here's hoping we'll run into some old friends playing Arena.