Ships of the Animated Series: Fralthi

Wing Commander's Fralthi-class cruiser makes a very brief appearance in "Expendable" - and not just any Fralthi... Ralgha nar Hhallas' eventual command, the KIS Ras Nik'hra! Oddly, the ship is referred to as being a destroyer... but you can't win them all! Four dual mount laser cannons are visible during the Fralthi's brief appearance. 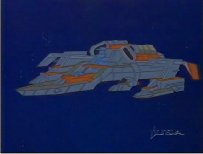