Ships of the Animated Series: Sabre

Wing Commander II's ultimate player ship, the F-57 Sabre-class Heavy Attack Fighter, makes an appearance in three episodes of the series. It appears as Karnes' pirate fighter in Episode 2, "The Last One Left," as part of the Tiger's Claw's complement in Episode 4, "Word of Honor" and finally as a Kilrathi prize in Episode 9, "Walking Wounded." Two different variants of Sabres' appear on the show. Karnes' fighter has three forward lasers and launches one missile, while the Tiger's Claw Sabres have four forward lasers and two dual-mount rear turrets. 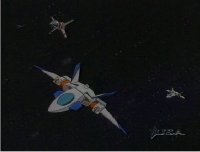 It was a close call, but Cinema came in third in our previous poll. This time we're asking what you like best, and I think we have something for everyone among the poll options.