One of the interesting offerings at this year's E3 was Tabula Rasa by Richard Garriott. This will be his first major venture back into the game realm since leaving Origin and Ultima. Starr Long is also working on the project. Tabula Rasa is an online game, like all NC Soft games, that take place in a half fantasy/half sci-fi setting. Their team has spent a lot of time trying to work out boring elements of other online games and make the entire experience fun. A lot of the features focus on easy collaboration with friends. Teleporters let you join someone far away, and voice communication is natively supported within the game. Character skills and attributes can be modified as the game progresses so early decisions don't hinder players. I watched a lot of people having fun playing at E3, but I also think the game looks mighty weird. Take a look for yourself. 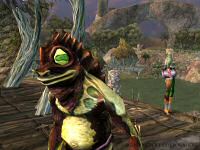 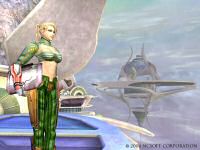 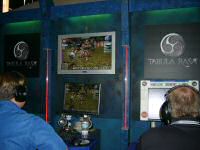 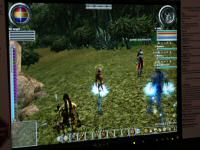 You can find a lot more information at the official site here.

Here's a quickie reminder that former EA/Origin producer Mark Day's set of WC novels ends in a few hours. Right now they're pretty cheap. Head on over to eBay if you'd like to take a peek.

A variety of places are reporting that major publisher Interplay may be shutting down, despite objections from its CEO. California is apparently no longer allowing Employees to work because of various violations, and it appears their headquarters lease has run out. The last game they made that I really enjoyed was probably Judgment Rites, but they also published Planescape Torment, Fallout and Freespace, among many others.