Happy New Year everyone! Thank you for continuing to visit us during your holiday time. Another year has melted away and we've got a whole fresh new one ready to go. 2003 was a very happy time for us. You visited the main page nearly half a million times in 2003 to view more than 750 updates. Including Crius.net and Solsector.net, we served some six million pages and over a terabyte of information. In the past year we saw the launch of a new Wing Commander game for the Game Boy Advance and got new information about a brand new Wing Commander audio volume coming up soon. Our annual birthday party set record attendance levels with over a hundred guests and we had a great time at our annual meeting at DragonCon. 2004 promises to be just as bright. Hopefully soon we'll have more information on Team Fat's music CD and several major fan projects should reach completion. We're already working on making our next birthday and convention gatherings bigger than ever. Origin will also reach new levels of activity with Ultima X and their additional staff. I'm sure there will be plenty of surprises as well. Thank you for making 2003 our busiest year yet, and we hope to make 2004 even better. 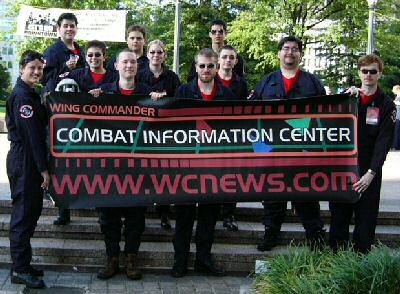 What Do You Think?

Our annual New Years poll is now up. Each January we ask you what sort of year you think it'll be for Wing Commander. Although the outlook has been somewhat more negative since work was halted on PC games, it has improved over the last several years as the community has come through and worked with each other to celebrate Wing Commander.

The last poll took the winners from our previous Favorite Carrier polls and pitted them against eachother. The Confederation Class Dreadnought just barely beat out the Bengal and Midway Class Carriers, but the votes were very close! You can find our old poll results here.

Feel free to send in your site of the year votes until we update with the final results.

Psych has sent through a nice New Year's gift, courtesy of the WC Saga team.. the model of a Gettysburg class cruiser - the famous TCS Austin. It's a great looking ship! 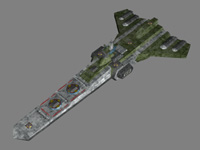 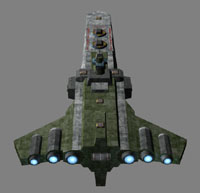 For all intents and purposes this ship is the class for the famous TCS Austin. If you didn’t know already, the Austin was only seen very vaguely in WC SM2 (and even then, they used an Exeter model as a placement), but it has been featured a lot in the WC scripts and the Freedom Flight novel.

You can read the rest and post your feedback in this thread. This is another beautiful design courtesy of Lynx.