Just a quick reminder -- CIC/agwc trivia responses for Week 2 are due to Chris Reid today! So finish 'em up, and find the glory that you seek!

The Wing Commander: Final Conflict site has been updated with a new 26 second movie segment (2.6 megs). 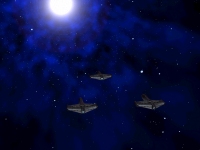 The Unknown Enemy web site has been updated, reporting that mission 1 is almost complete! A new plot synopsis has also been posted...

As the TCS Midway, pursued by the Nephilim invaders, jumps into the G'wriss, the Union of Border Worlds too, is bracing itself against the coming storm. The Militia is assembling its fleet... but not all Militia ships are to Be present.
The Border Worlds Defence Ministry has long believed that there's no need for strike carriers - like the Bengal-class BWS Dauntless - in the Militia. Instead of joining the rest of the fleet, the Dauntless is heading for the scrapyard. Most of its fighter squadrons have already been transferred off, to other ships. Even now, the Dauntless awaits a rendezvous in Kurasawa System with the BWS Intrepid. The Intrepid will take the Dauntless' last squadron of Scimitars. Lt. Colonel Johann Daniels, in command of that squadron, knows that his Pilots will soon see action against the Nephilem invaders. He only wishes that when the time comes, his squadron could still be operating off the Dauntless, not off some decrepit escort carrier.
But sometimes, it's better if wishes don't come true...

CIC staff member KrisV has created a cool new map for SubSpace. It's a swanky rendition of the TCS Midway... 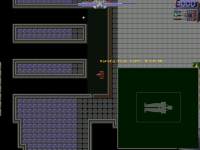 As Hadrian movie week continues, we present you with an oldie -- but a goodie. Grab this, the large movie we posted at our first anniversary so many years ago. Beware, it's a hefty 19 megs!

The Invasion mod for Star Trek Armada has updated their web site -- with word that they're planning on releaing a demo ship (possibly a Plunkett class heavy artillery cruiser) in the near future. They're also looking for Wing Commander sounds to replace Armada's native Star Trek effects... if you can lend a hand, drop Ladiesman a line.

The WCDC points out that the Wing Commander Secret Ops Missions site has announced that they plan to have the last of their Wing Commander Rebellion mission set completed by Christmas.

Digital Anvil has updated their Freelancer page with a new Team Bio for November. What's this have to do with Wing Commander? Check out the picture!

The big news from the UO Faire was, of course, that Origin has announced their new UO client -- Third Dawn. Read all about it over at Computer Games Online.

The event itself was a lot of fun -- lots of interesting seminars and such, even for a casual player like myself who didn't understand half the conversations he took part in. It was really great seeing the UO community come together for this... someday, I swear, we'll do a Wing Commander Convention. Everybody there was very cool to this old WingNut -- despite my lack of experience. I'll probably post a few pictures as soon as I get my film developed.

And of course a big final thanks to Joe and Paula for sending me -- your number one status certainly extends beyond the realm of Origin memorabilia!