Huh, I honestly didn't notice how the text and picture work together. I'd pull up some picture of the guns in WC4 but for some reason the Wing Commander movie player refuses to work with my DVD.

You can play the video files straight off the DVD version - you don't need HCl's player for that one.

That is the sidearm I was thinking of... it looks like the same kind Iceman is always polishing in the original game.

It doesnt seem to be an energy weapon either... Neat.

It looks similar to present-day weapons, but I don't think that's quite enough to claim that it's not an energy weapon - we can't be sure of that, one way or the other.

I was refering to the thing on the top, which on modern day weapons jettison the emty bullet casings.(cant remember the english word for it) But you're right of course... It doesnt have to be what it looks like.

Edit: Might be for energy cells as well, but IMHO this seems a little unpractical...

It looks like an M-1911 Colt .45, but without a hammer. It could have a self-contained alternate means for igniting the propulsive agent in the projectile. The word Dyret is looking for is ejection port, and since the weapon has one, I'm leaning for classifying it as a ballistic firearm, slug-thrower, or whatever you wish to call it

I agree that it wouldn't make sense to have a magazine full of seperate energy capsules that discharge and eject, as opposed to a single-piece magazine. All it needs to do is regulate and release the amount of energy needed to be considered lethal, until the magazine is spent, rather than have a few extra unnecessary steps to do the same job.

All That Remains said:
what about the rifle blair was holding towards the end of WCP?
Click to expand...

Plenty of guns in Wing Commander 4.

This handgun is seen aplenty, among other things carried by Vagabond in his last stand and Blair infiltrating the Black Lance base. It fires a blue bolt of energy.

This seems to be the standard rifle of the Confederation forces. It is carried by the marines and onboard security personnel. Fires an orange bolt of energy.

One of the marines landing on Telamon is carrying a bigger bang. Wing Commander's equivalent of a light machine gun or an antitank weapon?

And the welcoming party I guess has civilian weaponry or maybe some older models retired from military use. In the corner is a profile shot of the one on the left.

Say, wasn't there once upon a time at least the beginnings of a fan-made Wing Commander FPS?

Crowley said:
Say, wasn't there once upon a time at least the beginnings of a fan-made Wing Commander FPS?
Click to expand...

I can think of a game with the name Wing Commander: Confed Marines or some such that never really got past the first development stages.

Yeah, they never got past that all-important first step of taking a screenshot of a red, empty room.

What about the bookcovers? 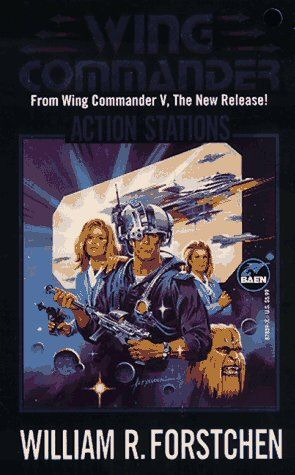 The uniforms in that foreign cover remind me of Super Wing Commander.

Frosty said:
Yeah, they never got past that all-important first step of taking a screenshot of a red, empty room.
Click to expand...

I think that was the basement in The Amityville Horror. Not a game screenshot.

Here's the rifle from the movie:

The long rifle on the German Price of Freedom cover looks badass.

That second bookcover is just freaky. Otherwise this is a great thread.

Wouldn't the scene of the Kilrathi marines invasion of McAuliffe VI suggest a 4th Kilrathi rifle that fires a projectile?

Heres one the thread seems to have skipped over, surprising considering most of us went up against these little pains in the ass during our time with the UBW

Im a bit hazy about the weaponary used in the WC universer, but when did they used energy based weaponary to the customary ballistics based weapons??

Aplha 1-1 said:
Heres one the thread seems to have skipped over, surprising considering most of us went up against these little pains in the ass during our time with the UBW
Click to expand...

Eh, come on... you must know that everybody went to Speradon to get new toys instead of going to Circe