Privateer did eventually get a sequel. Privateer 2: The Darkening is one of my favorite games of all time (and GOG willing, a subject for PRIVATEER 2 DAY)... but why wasn't there ever a direct sequel? The sad truth is that while many other Privateer followups were attempted, all met sad ends. Here's a quick rundown:

Privateer 2 was a Chris Roberts project that would have been developed after Wing Commander IV. Chris left Origin instead and the project was replaced by The Darkening, already in development in the UK. Privateer 2 (and a sequel) were also part of the plan for the 1995 Privateer television series project.

Privateer 3 was one of the saddest chapters in our history. Privateer 3 was deep in development by the Crusader team and ready to shoot its film segments when it was unceremoniously cancelled. Adding insult to injury, the cancellation came just days after a beautiful multi-page magazine preview had formally announced the game in the first place.

Privateer Online seemed like a natural followup to Ultima Online, and all the more so after EA dictated that Origin go 'online only'. Sady, after some development the game was cancelled and the team fired mere days before the release of the Wing Comander movie in 1999. Most of the POL group went on to do Star Wars Galaxies for Sony. The proposal actually talks about four games--Privateer Online, POL Gold, Privateer Online 2 and POL 2 Gold.

Privateer Online (again!) was a second attempt at Privateer Online developed in 2000-2001. The game got far enough to have a very rough interface where players could walk around in an environment... but in the end, the budget axe killed it. This version would have reused elements from both Ultima Online 2 and Wing Commander Prophecy!

Wing Commander Mercenaries was a Privateer pitch developed in 2005 by Origin veterans who moved to California wih the UXO group. It was described as 'Battlefield meets Grand Theft Auto' and would have involved a multimedia franchise relaunch similar to that developed for Dead Space.

Privateer Browser Game was a project explored by Electronic Arts in 2008, similar to what became 'Lord of Ultima'. It would have been a very simple click-to-play RPG, but absolutely thick with Wing Commander lore. Critical Mass did early concept work for the title but had a falling out wih EA over rights. 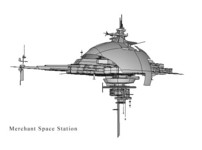 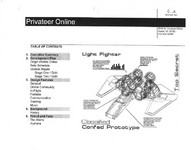 The positive thing to takeaway from this endless list of cancellations is that EA is still being pitched and considering WC games. One is bound to get through eventually