Major Striker has created a neat scene involving his Raptor and Krant. A trio of Confederation fighters are cruising through a desolate region of space when their routine patrol turns dangerous. It's probably not Khajja the Fang flying that Krant, since he never liked bad odds. You can grab the 11 meg .wmv and see the action for yourself here. 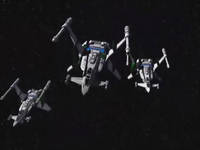 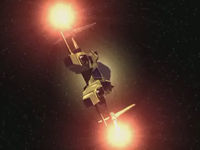 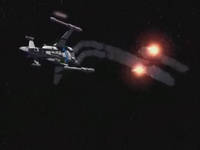 @Striker
You are getting better and better, that battle looked quite good and I lik the fx for the Kilrathi gunfire.
L

@Striker: gotta agree, everything was great, even the vocie acting

Just that smoke was a bit out of style.
One day one of our many great animators gotta (=pleaseifyouwouldbe so kind to) tell me how to do such great laser gunfire effect

I really missed the fireworks though (= no missiles were harmed dureing the production of your movie=one of the raptors should fire one and the krant should evade maybe?)

Excellent Work!
I see I gotta learn a lot to reach up to the standards in the future.

In my modest opinion of fan, not of modeller apprentice, I have to say that your animation is really nice, liked it a lot. I agree with LDV in the voice-acting department, I just would suggest one or two taunts from the Kilrathi pilot to make it even greater.

And thank you for contributing for the continuation of the dream.

Thanks guys. Honestly, all credit goes to ZfGoku for the great voice work (Keenan Weaver) he did a great job of recording the voices. I threw in my voice there because I didn't have anything else. As for the smoke trails and such, I knew they aren't realistic but I was experimenting with different things and kinda liked them so I left them in there. This clip was mainly an experiment in trying to light my scenes better and I think that turned out pretty well. This is probably better than any of my previous creations so at least I'm making progress. So you wanted to see a missile or two eh? Well maybe I'll create another scene with Pilum FF or two.

Thank you, thank you.

I really liked the video, Striker. You should do some sequels.

I did really enjoy this video. Yet I have two remarks after I have watched it some times.
Befor the attack, the Raptors seem to behave kind of strange. I wondered what this might be. Now I guess it's the really extrem movement in relation to each other (hope this makes sence

). They act like a boat or a number of jetfighters today would do. They seem to fight with the element that carries them to stay on course.
I guess this seems right to us because we are used it this way, but in space it makes no sence.
The other thing that seems strange tome are the gun bursts or projectiles (whatever is right). They are a little lumpy, as in arcarde games. I have the same problem with the gun bursts in Standoff, but I gues it's a matter of style anyway.
Yet, when I see it as a whole I really like the file and I sure hope to see more of it soon... great work

You could probably attribute the pilots moving around like that to pilot imperfection on the stick. Maybe they're just bored so they moved around. It may not be the prettiest explanation but atleast it would be plausible.
M

I don't say they shouldn't move like this. I just said if you watch it some times and start to think about it you'll wonder why they do so...
I ought to read some introduction into space mechanics...

Well he's got a point. Theoretically when the ships are flying in formation in space it'd be perfectly uniform, no bumping or jockeying around. However, you'll notice in those scenes the background doesn't move either so if I had made those scenes more "realistic" it would have been quite boring as the Raptors wouldn't be appear to be moving at all, just hanging suspended in space. I did a scene a long time ago with a formation of Dralthi in perfect formation...looked absolutely horrible. I may have over exaggerated the movements in this movie but it does look better than just a picture like formation. As for your comment on the guns...can you explain that a little more, what do you mean?
M

Yes, I guess it would look like there was no movement at all... and I see why this would be boring...
I'm not sure if I can make the gunthing mor clear. In your file it's not as bad as it is in standoff because your bursts are grey and fit into the background, but stil they are that huge... I think they look like thrown rocks... In standoff it's worse, there they sometimes look like colored bricks... especially the laser bolts...
But, as I said... I guess this is a matter of style and maybe I'm the only one who experiences it like this...

Ah...you wanted the gun blasts to be smaller, thinner with more glow to them?
L

I too noticed that the lasers look very grey, like they'r planes textured like a laser shot, and haveing transparency. For me, the size of the shots was allright, I would suggest to add a shaper glow. Maybe that would help?

About the movement thing. Well, have you ever tried flying in formation in a space sim like freespace2 with some friends?

We got the same effect as here, and sometimes we got bored, and moved around jsut for fun, but even when in strict formation we allways moved around a bit (cause we could never point the nose of the ship at the corret spot, thus never got on a totally paralelle vector).
I think it's a perfect little effect of this movie. I'ts not too much, and not too little to notice.
I also animated some formaiton flights before, and I allways had to add this "unnecesary" motion, otherwise it would have looked totally unrealistic for our eyes

I watched it again, and I have to say again, great work there!
Even the smoke starts to looks fun, just sometimes gets very scarce and loose (when the fighters pull hard manouvers, the density of the smoke gets too little, thus showing individual circular puffs).
M

Maj.Striker said:
Ah...you wanted the gun blasts to be smaller, thinner with more glow to them?
Click to expand...

I guess this is it

I'm playing Freespace2 right now and you are right. But I consider this to be a problem of in-game-steering and, as a whole, of the translation of space mechanics into a game. If it was a meant part of these vessels, that they couldn't stay on course, they wouldn't reach no place never. Just imagine, you are half a day away from your opperation aera, no sight, no landmarks, nothing... and your ship wasn't able to keep on course better than this... you would be lost.

Yet, strikers explantion was quite reasonable. It's like sound in space.... nonsence... But otherwise you would have ships which seem to stand still and make no sound... there's no thrill there...
L

Martini Doctor said:
Just imagine, you are half a day away from your opperation aera, no sight, no landmarks, nothing... and your ship wasn't able to keep on course better than this... you would be lost.
Click to expand...

Yup. Well, if I would need to give a reasoning to this unnecesary motion, I would say this: While in space, on patrol for example, you don't need to fly to a point in space, you rather need to fly to an area. So, there's no need for such precise control. And, if your ship could fly a totally straight path to the waypoint, you'd fall asleep

The need to "fly" the ship keeps everyone alert*.


Allthough, the in-cockpit motion like in Star Wars is really overused and annoying. They at like the ship was a swing, or a car on a very bad road, swaying back and for all the time. Thats too much.

That reasoning with the "sound in space" really gets to the whole of the subject, thats a good one!

*Personally, I allways get a bit too relaxed when flying an F6F in Pacific Fighters, cause it can fly straight like a dream, but when flying a Bf109G2, I'm always alert, cause it needs constant manouvering to keep it on the correct vector.
C

It is perfectly resonable to have sound in space cinema. If only every sci fi geek would listen to what the only people who have actually been in space have to say about the subject, this gripe wouldn't be so popular.

While it is true that sound does require a medium to travel through and space is a near vaccum, things like heat, friction, and radiation (forces that can CAUSE sound) do not. Astronauts have stated repeatedly that they can hear things going on outside of their shuttle while inside.

In WC's case, the explanation is rather simple: the computer takes input from various sensors to create the appropriate sounds as an extra assist to pilot awareness.

Of course, I doubt that one of the reasons people in general like WC is because it's technically accurate given present-day real world knowledge of physics.

Excellent work, Maj.Striker and good work on the sound, ZFGokuSSJ1!

I thought the weaving Raptor's added a neat dynamism to the animation -- I really liked the scene at 1m:35s when the second Raptor started firing at the Krant from the rear.