Too Noobie to build own ships so I try to get some old ships at least near to Saga ready. Still in works - copy some textures into the old one and replace turrets and engines
View attachment 9539
I working now on the underside and try to put in modern Hangar of the Saga Destroyers. At least for some shots of the ingame movie.
Click to expand...

Or whatever it was called, unless I'm just going crazy, lol.

You don't remember this? The one in the bottom center? Definitely looks like something I'd want in my fleet. Maybe it never had a name, I'm just going by what I swear I thought was it, wherever that was.

The Gettysburg Class Battlecruiser. In the Novel Freedom Flight, Wing Commander Secret Missions 2 (Placeholder was a Exeter for the TCS Austin)
Long History. Lynx from the Saga Team made a Model back in 2003

The Saga Team ifself doesn't have it in 2009 when they give me all the old models. So after a time I met Starman01 who make all the old models for Saga back of the Prologue 2006 release. He had the model and Kevin from the Forum here help me to make it ready for the prologue 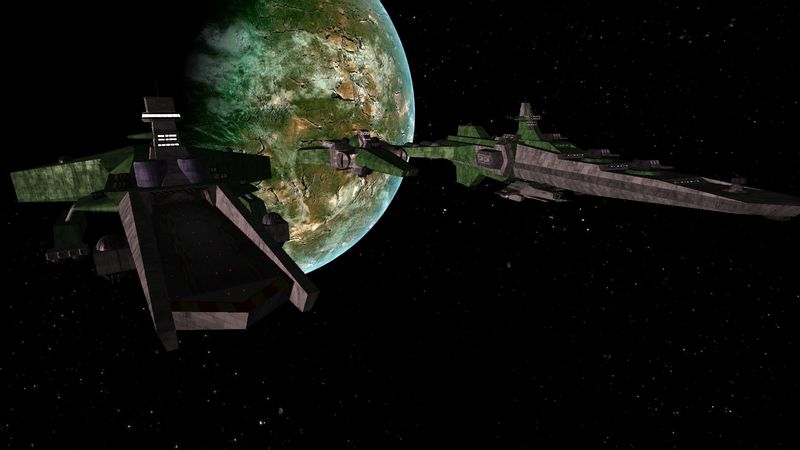 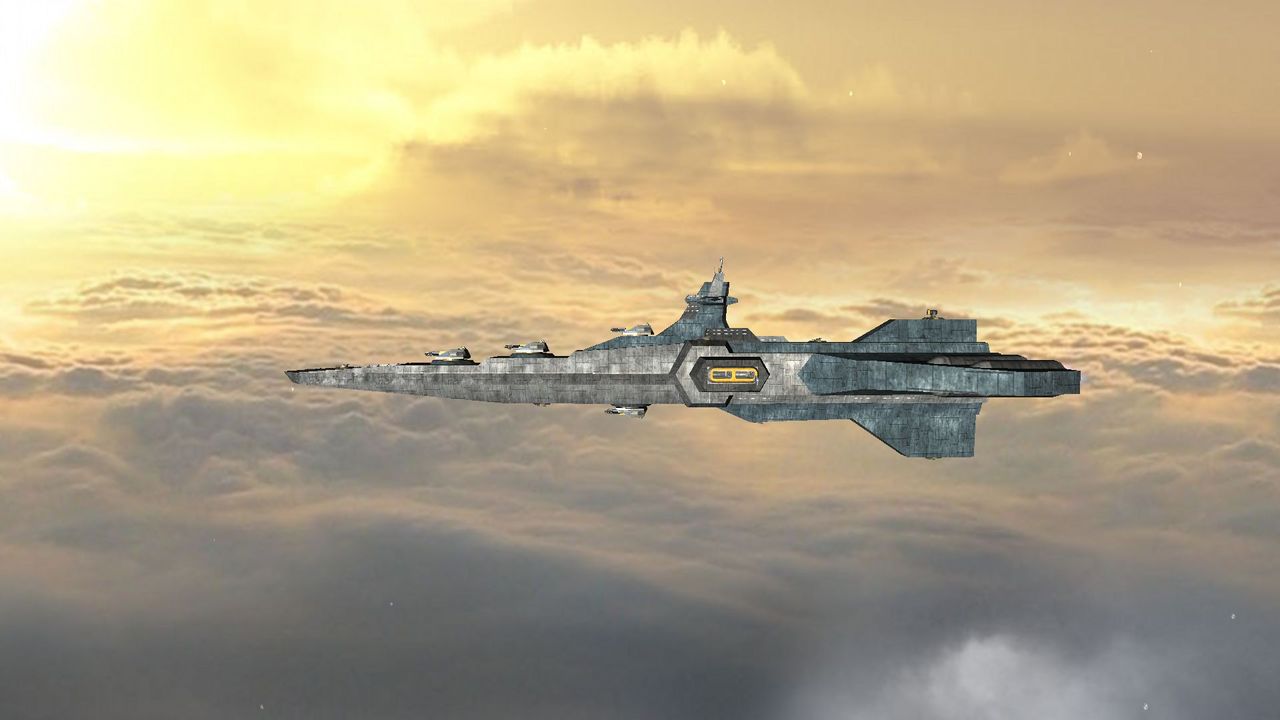 Just the same as I try now with the Exeter - copy some of Scoobys turrets, engines and other parts into the old model. But then Scooby make for me a real Saga Model of the Gettysburg. I Change myself some parts but this was the final.
Here in green Colors like Wing 1+2 with the help of RedBaron 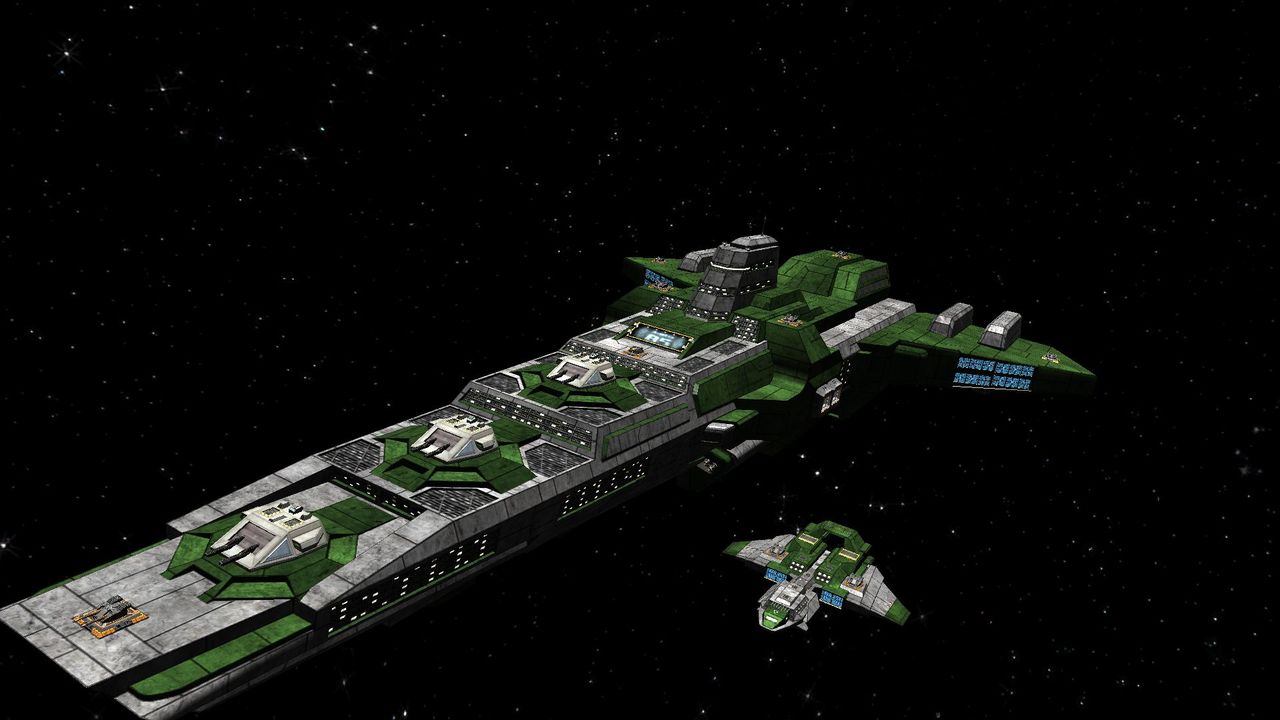 also the Bengal, Gilgamesh, a heavy WC3+4 Confed Destroyer, WC2 Sector Base and some other stuff not in Saga. I just want now the Exeter and Waterloo for my Project. A self made Wake class is done in the past and I try to even make the Tolmacs ready for some Scenes. Between the Bengal and the Exeter - a light cruiser, first design by NinjaLA, then Howard Day to this of Cybot078 and Kevin help again to finish it for the prologue. I
Last edited: Jan 27, 2018

Still need a shine texture and try to make another hangarbay. The Windows on the Exeter not match with Saga Details.
And here again the Video of the Kilrathi Frigate and heavy cruiser Fralthi II - this time the enemy are three Exeter...
Don't know why one of the Exeter just fire a few shots with the AMG

1 Dual AMG and 6 Dual Laser Turrets. Don't use Anti Capital Missiles on this one.

On the Exeter I now Need some destroyed turret and engine parts. Not a big Thing. Also the turret armor are very weak.. Maybe I give it then more shields and a bit more armor. Anyway...the bigger Problem: The texture copy was not it. But now I Need to figure it out how I placed the turret barbets on the hull. The old Saga Model here from 2004 I think, have many curved parts. Also the Engines replace will be looking not so good and where I can place in the Intakes? Guns would be the 4 Anti Mater Guns and...Exeter have 6 Laser - I give it about 9-11. The Southampton have 8 laser. I don't know if I should make it larger So that ship I saw is the Northamption, really glad to have gotten that cleared up!

All of this is looking really great so far.

Still some Errors, texture Problems and missing turrets on the Tolmacs - next overwork.
Missing - I lost my Drayman :/
And the Wake Needs a few overworks too before I post some new Screens
But here : the Fleet of Confed 2654-2668

And a fly to Olympus - a bit bigger

So the Rigakh is bigger then even the Confederation class. I scaled now the ship first to the "Canon size" (best confirmation in size. Used before from a Fan RP Game 850m). But Sagas model are much bigger then Canon for Gameplay reasons. So I scaled it up to Show a difference between my very big Bengal, Sagas Confedeation and the Rigakh Carrier!

Confeds have now to fear this Monster

No turrets yet mounted... that will a challenge

How many AMG and Laser turrets? Torplauncher?
Last edited: Mar 17, 2018

Continued to Transfer old ships into Saga and make some changes..

We found the Base. Break and attack!

All of these look simply gorgeous!

Deathsnake said:
Continued to Transfer old ships into Saga and make some changes..

We found the Base. Break and attack!
View attachment 9726

There a better way to view those screencaps?

Aeronautico said:
There a better way to view those screencaps?
Click to expand...

I don't understand the question... is something about the screenshots not working for you?

Aeronautico said:
There a better way to view those screencaps?
Click to expand... I think I go for the attachments in the future. I don't know - ChrisReid - Whats better for you? Full or Attachment?

Either way is fine. Thumbnail loads faster for people and potentially reduces bandwidth use, but full displays nice when you're trying to highlight an image. I think it depends on the situation.

Deathsnake said:
Want a Full Screen?
View attachment 9727
I think I go for the attachments in the future. I don't know - ChrisReid - Whats better for you? Full or Attachment?
Click to expand...

Yes thanks, the thumbnails were not working for me.

Still not done yet but some armament on the Tolmacs light Cruiser done.
Underside missing laser turrets, a side mount is still open and don't know if I give it Missile turrets or even capship Missiles.

One turret from my Gettysburg is on the underside, side 2 Anti Mater turrets and some lasers. Don't know why they blow up so fast.

Against 2 Kilrathi Frigates and a Troop Transport if fight well

Edit:
And the tubes work - Start with a F-44G Rapier 2 and later my Wingman start And the Updated Waterloo. This project is still going on?

Jea. But not as a Game. Videos with Story planed but I work on some days on it. Then a Long time not because Star Citizen

Just for some fun.

yeah.. I love what you have done with that tolmacs