I make 3 Episodes for LLoD with around 15 Missions each. So I can finish one and then can start the other one.
Kevin, Starman and Gevatter Lars helps me here out with ships and ideas. So here some pics:

1. In the WC3 Intro the Southampton has a hangarbay in the back. In the Saga Prologue not. I ask Kevin if he can put the Talabay into the Sheffield. Fighterwing of 4 Arrows and a shuttle now on board.

2. I've seen here in the CIC a pic from Ela Superbase with the Midway. And it was huge. I transform now the size of my Ela Base by factor 2 or 3. So now it can be called Superbase (see the Wake Class in the Bay?)

3. The players carrier: In the Novel of WC3 Paladin is joint the Victory with an Eagle Class Carrier. Its larger then the Yorktown and the newest ship Confed build. So here it is : The Eagle Class! Design by Gevatter Lars and finish by Kevin. In Last Line of Defence its the TCS Adenauer in Battlegroup 75. My Idea was to build in the newest carrier the latest Weapon Design. I was watching in the last time much about the modern fleets in the world and on the german frigates F123 and F124 and the US destroyer and cruiser also has VLS missile launcher. So why not use such a system on a WC Carrier?
Kevin did a great job. If you look close to the main tower, you see there 8 missile tubes. They closed....

4. and here its open and fire the Phoenix VLS missile on a Fralthi II class. After the destruction of the Kilrathi the bays closed again.

5. here a little joke: 4 Rapiers above earth. On the front Rapier is a Snake-Image = Deathsnakes Rapier II

6. Three Gettysburg Class Supercruisers/Battlecruisers on the way to their battlegroups

7. A Mod. Wake Class - Remember the standart Wake Class has a closed entry on the back. Here a few fighters from Klavs are on the deck and a Rapier landing.

9. One last: I wanted a counterpart for the Kilrathi Kamrani Corvette. I now used the one from Scooby. Changed some textures. This ship is a capship killer. Armament are 4 Laser, 2 IR Missile Launcher and 2 Capshipmissilelauncher. You can say this are the submarine in the Wing Commander Universe. In groups they are deadly!

Here is another one:

Pic 1:As I say, I have the Southampton with hangar. Now what I'm do with the Sheffield in the Saga Prologue? I build a heavy destroyer. I take 2 turrets, place them inside of the ship and you can see only the barrels a little bit. The barrels I transform by factor 3 so they are now bigger and widther. Now it have 4 VLS Launcher. I use the Sheffield as the heavy Confed destroyer.

Pic 2: 2 Sheffields and a Eagle class engage 2 Ralarad light destroyers and a Fralthi 2 cruiser. Take a look at the VLS from the 3 ships.

Pic 3. The light destroyer are without any chance to reply this firepower. The Fralthi II is outgunned to the Confed ships.

Pic 4 and 5. The end of the Fralthi 2. Confed fires all VLS Batteries!

Deathsnake said:
I make 3 Episodes for LLoD with around 15 Missions each. So I can finish one and then can start the other one.
Click to expand...

That's a good idea. Working stuff in small doable segments is more achievable for someone and allows you to get playable material out to people faster.

The screenshots look good. Are you going to be able to manage working on this and the WC2 project at the same time?

Well, for Last Line of Defence the Plot for the first 15 Missions is done. Here I can use different ships and stations in the missions and the cutscenes. That means you are not all the time on the TCS Adenauer. In Last Line of Defence I have no rules what kind of ships are in this Sector 2669. In the cutscenes I can tell the story also in the ingame grafics better than in the WC2 Remake. Here is one example:

You help 4 of the new Corvettes to the Jumppoint and return to the carrier. Then in the cutscene you see a heavy convoy of Kilrathi Transports. The Corvettes meet another ones, hiding in a asteroid field and starting firing they capshipmissiles on the convoy. After the destruction the camera is show one terran Battlegroup and they talking about the success of the strike.

WC2 Remake is atm going slowly because I just waiting for all the models. The most missions are simply copy one of the first 4 missions. The making of ingame cutscenes takes the most time. Here I have not much options because we see in 95 % the Concordia ._. A few cutscenes are different, like the one: Concordia escape from Tesla into the enigma sector and the TCS Hector will be destroyed (One of my better cutscenes)

Thats again the reason why I stay at the prologue. Kevin and Starman help me with different models. In Saga Final I have much less models. And I can't use the one from final and my together. Take a look here (Pics from Saga page, but as a beta tester I can confirm this is ingame grafic)

On pic one you see the Savannah class light cruiser docking on a orbital plattform, Prologue version (Yes, I use here the com-station from WC4) On pic 2 you see the final version of the Savannah. You can see, the difference. Both are in the SCP but Scooby build the whole model new. The hangar, turrets, engines, textures - all is different and did not fit together. I've got here 2 options:

1. I make Last Line of Defence in the Saga Final Optic - then here I have around 20 models less then I used now in Last Line.
2. I make LLoD for the Prologue and later I transfer the missions into Saga Final when all models are converted.

Here is the last ship with the VLS missile launcher.

The Caernavon frigate is outgunned by the Ralarad destroyer and even by the Kamrani corvette. I put here only one turret inside. It fire 2 VLS. With this firepower it is more powerful then the Kamrani and when the Ralarad is not close enough, the Caernavons VLS destroy the destroyer.

The Savannah, Talahassee and the Gettysburg has enough firepower with their AMG guns. but the frigate was outgunned for its class.

I building atm on another hull of a Talahassee a missile only cruiser. The idea is from the Wing Commander Online project.

It is not in the Mod because it's too overpowered but it's a idea how Confeds forces can be gunned in the future beyond Prophecy.

Can you really have vertical launch tubes on a space ship?

Jason_Ryock said:
Can you really have vertical launch tubes on a space ship?
Click to expand...

Does it really matter if there's no up in space?

Origin itself came with the idea. For Privateer Online there are some concepts. Here the one with the VLS: 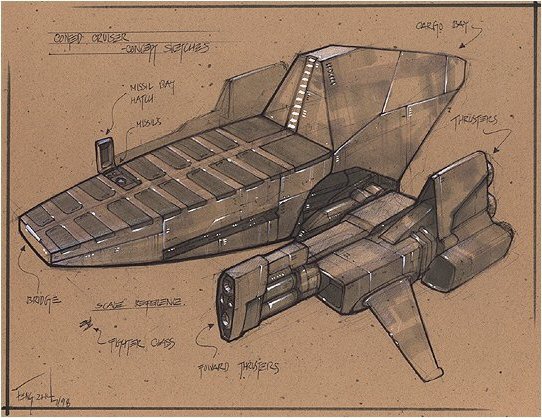 Does it really matter if there's no up in space?
Click to expand...

The enemy's gate is down

I think the Wing Commander Aces Club had a VLS-style system that they were moderately obsessed with in their fan designs back in the day...

What's that carrier with a hole in the top? I swear I've seen that in another fan mod. What's the hole? An elevator?

Re: VLS - well, I guess it would have a bigger firing arc (if you had another cell on the bottom of the ship, too) than having a cluster pointing forward.

I'm surprised no ones fanwanked the swarmer missiles so we could experience Macross Missile Massacres.

Thats a Jutland Class Strike Carrier. Armament are 2 AMG, 2 Missilelauncher, 10 Laserturrets, Capshipmissilelauncher and 9 Squadrons of Fighters = 108 (12 Fighters is one squad)

The hole is the entry for support ships. In Saga Darkest Dawn Scooby make a new model: here its closed (screen from the Saga Page) The ship on the left. On the right is a Yorktown.

Out of curiosity sake where was it stated that the TCS Eagle was a part of a new class of carrier and not a Concordia or Lexington?

Well, there's only one place the TCS Eagle is ever mentioned... so, there

Ahh I guess I forgot that part and figured that the first choice of posting for the protptype excalibers would be a heavier carrier.
F

Bandit LOAF said:
Well, there's only one place the TCS Eagle is ever mentioned... so, there

Are you sure that S*S was talking about the TCS Eagle when mentioning the Harrier-Class?

We also have here some new models:

CVE, CVA and Battlecruiser, again CVE, Marine Transporter, Frigate and Tug. Again we need help for the textures. MSG me, FekLeyrTarg or Cybot078

The author of S*S actually provided a handy commentary for every page. This one is the most interesting in my opinion:

Lots of class names are defined on page 3 it seems.

It would seems to indicate that there were only two classes of escort carrier from the 2660s into the Nephilim war era, so the TCS Eagle has to be the Harrier class since it is part of the new escort carrier class.
Last edited by a moderator: May 24, 2018
You must log in or register to reply here.
Share:
Twitter Reddit Pinterest Tumblr WhatsApp Email Share Link
Top