Good Old Games is running its annual holiday sale, and as usual, the deals are amazing! Virtually all games are 50% off, which means Wing Commander titles run just $3! Amazingly, it's possible to purchase WC1-4 and Privateer for under $12! Even if you've bought them already, the games make excellent virtual gifts. There are also tons of special bonuses such as the novel Fleet Action with WC3 and high quality DVD movies included with The Price of Freedom. Pick them up and help speed up the release of more WC games in the future. GOG also ran a poll earlier this month, and Wing Commander 3 won as the best game of the year 1994 - congrats HotT! 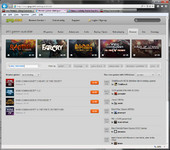 You have selected your best game of the year 1994 and it's Wing Commander III
Click to expand...