Well I had no thread of my own, and the news thread has disappeared into the archives so I thought I'd better start one and show my progress.

Its been a pain in the backside trying to re-do what i've done so far, but its *almost* done. Still need to re-add a few effects which had to be replaced because of the appauling way I made the scenes the first time.

I won't be showing any avi's for the moment, but i'll be posting a few pictures of my progress here so you can get the idea and throw a few comments/suggestions my way.

I have made 3 pictures in similar positions to the 3 captured in the original news post. Here are the originals to compare: 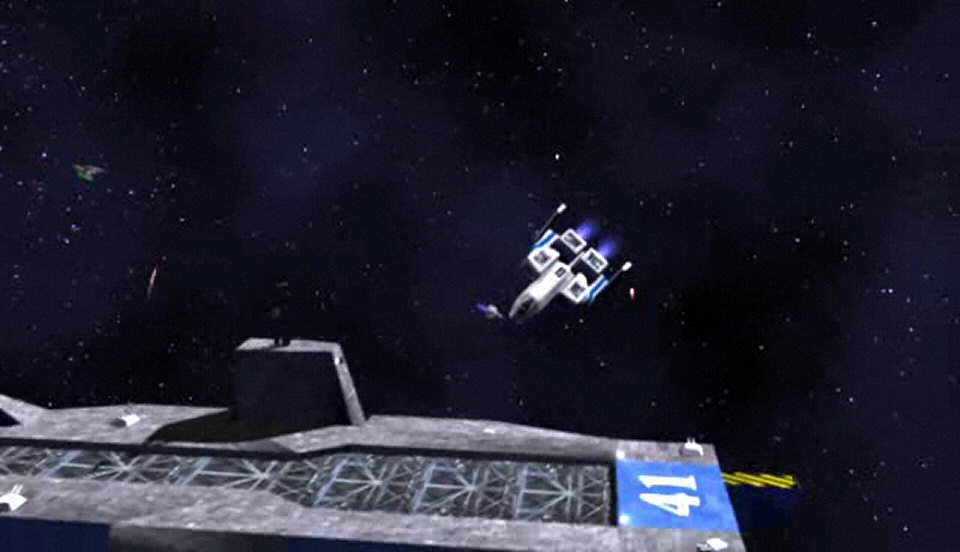 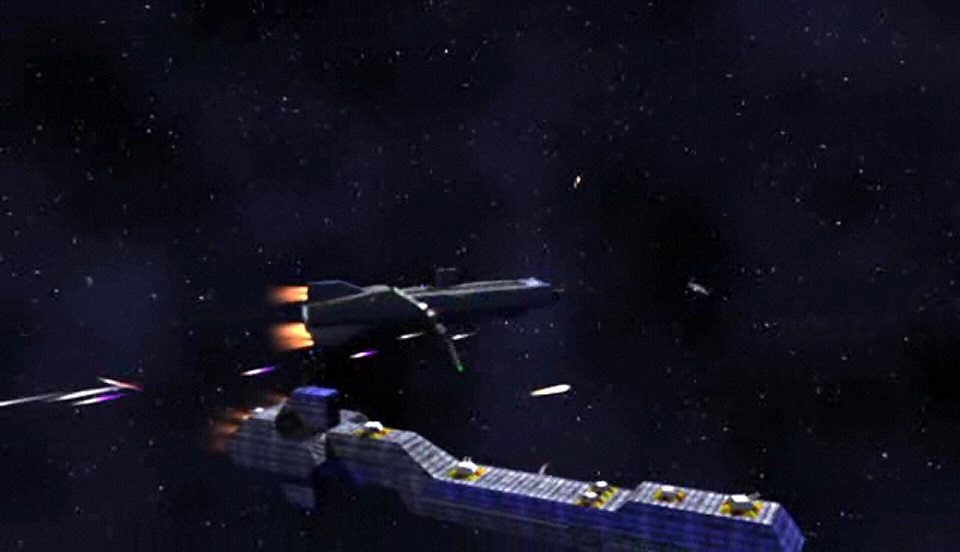 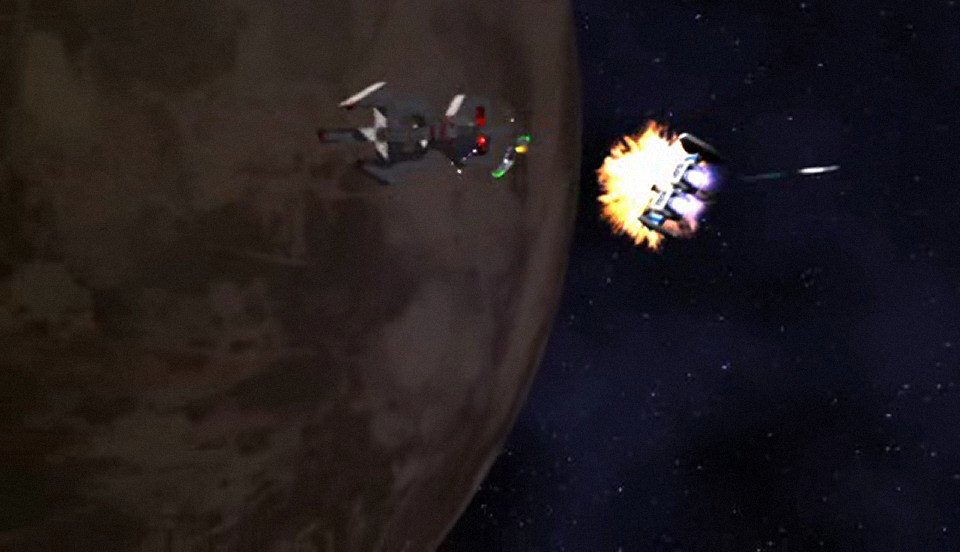 And the rebuilt (so far) images. Low rez at the moment sorry

The new lighting and shadows are looking really good!
Are you using any soft-focus or motion blur on the new renderings?

I agree the new lightning makes it look much better but the images seam to be a bit blury.
G

Yes there is 50% motion blur on the rendering, but no soft filtering.

The reason for the blurryness is because of the low resolution. The final will be rendered in 720p, this test is just 50%.

Have you also put some grain on the images?
G

Yah, but its no good for the low res. Plus the jpg compression probably doesn't help =(
G

Well I finally began rendering of the 2nd half of my original scene on saturday night. Its now tuesday morning and its still going strong. I estimate it should be finished by tomorrow (I hope!). Once thats finished I can composite all the passes and begin on the 1st half which, now I already have techniques in place from the 2nd half) shouldnt take as long to build, but probly just as long to render.

The reason for it taking so long is that there are 13 different passes to render. Each pass is 240 frames. Each frame is 1280x720 resolution.

The frustrating thing is I don't have a 2nd pc or seperate render farm, so until this render is complete, I can't do any more. I do work for a company that provides PC's to its customers, and we do have many returns downstairs which I could repair and make use as a render farm, but I doubt my boss would like that

Anyways, my 2nd (or 1st half) of the scene can be put to render when I go on holiday 1st week of November. Off to sunny spain for a long weekend to watch the last MotoGP of the season and soak up some sun.
H

gr1mre4per said:
The reason for it taking so long is that there are 13 different passes to render. Each pass is 240 frames. Each frame is 1280x720 resolution.

HOLLY MOLLY! This is going to be HUGE! Literally!

Can't wait to see it

As with my original, i'm going to be using the WC IV intro music, so you can guage how long its going to be in total. The first 36 seconds is going to consist of the origin logo I ripped from my WCIV DVD and converted from 30fps to 24fps, and model/technique credits. The first few scenes after that won't have so many passes because theres no weapons/explosions etc. The worst part, render wise, is the jump in sequence which adds 2 passes. 1 for the effect, and 1 for the additional lighting.

My 13 passes for the scene i'm rendering at the moment (scene6) consists of:

Well, thats done now. All10 seconds of it.

I have sometimes even devided the scenes into different layers of ships. Like haveing caps in one part and fighters in another pass and another for the background. Sometimes its worth it sometimes not. It depends strongly on the scene but I agree with you that rendering, espacial when you go for the HD, takes rediculas amounts of time.
For me the worst thing is when you have rendered everything and then you find a glitch. Happend for me from time to time...then you have to do it again and hope that its only in one layer.

Still I can't wait to see the results.
G

Yeah ive come across that a couple of times. But thats the good thing about doing it in passes, hopfully the glitch only affects the one pass.
Just bought myself 2gb of ram as 1gb just isnt cutting it. it cant even load steam/TF2 without using swap files now. Just wish I had a 4ram slot mobo instead of a 2.

As for wishes...I wish I had the money to buy or just the chance to test a Quadro FX card. They should provide quite some power for rendering. The best of the "cheaper" models is about 400-500€ and the more highend cards about 800-1000€.
G

The passes are rendered in single 128bit.exr images. Fusion reads the Scene####.exr and automatically imports all images in order.

No, straight-to-avi I only use for doing low resolution test renders to make sure things go alright. From the start, I realised if I did 240frames straight-to-avi but frame 200 fubar'd somehow, then back to the start I go. Its a painful procedure if you glitch or get a power cut, or, what happened to me on several occasions, the PC just flicks off for no apparent reason. On thoes instances I just edited the scene I was doing and changed the frame range to start from the frame my PC crashed on and away it went.

All I need to do for the first half of my previous combat scene is add some engine effects and weapon lighting, then i'm off on holiday. Which means on the render the scene goes and hopefully I will have made each scene correctly and it will all be done when I return. Then, its onto the rest. I've also upgraded to 2GB RAM so no more swap files, woohoo!

How did the mammoth rendering session turn out?

when can we expect to see the animation?

By the way, are you using 3d Studio max?
G

Its been a while, lifes been a tad rough past year but i'm still around and still working on this. Spending some time out the country soon and work has provided me a laptop at last so I can fill some of the boring nights up with some CGI making at last.

Anyways, I kind of scrapped my jump point in favour of a more prophecy style jump point. Didn't take me that long in total hours to make, but it still took me a while working on it here and there.

I certainly do
H

Niiiice! Looks very accurate (from my admittedly poor memory) and looks spectacular. The only thing I'd suggest as a change is to make the scale of the ripple/caustics effect around the outer edge a bit smaller - that should help with any scale issues. Right now it seems a bit small. Texturing on the midway might help, too, of course.