From 1996 to 2002, Electronic Arts published a variety of military games under the Jane's Combat Simulations label licensed from renowned defense industry publisher Jane's Information Group. These games were known for their high quality and extreme attention to detail--and the best of the series were developed at Origin in Austin and Baltimore. Fans of these games may want to stop reading this update right now.

A publisher named Evolved Games has apparently licensed the no-longer-as-prestigious Jane's IP and developed a new game called 'J.A.S.F.'. Does JASF live up to the incredible legacy of realism purchased from Origin's Longbow and F-15 teams? Just read the actual product description, which I promise you we did not make up:

J.A.S.F. Jane's Advanced Strike Fighters is set in the fictional country of Azbaristan; the once-great nation has been torn apart by a decade of civil war, followed by almost a decade of uneasy peace.

The ten-year war resulted in huge territorial gains for Northern People's Republic of Azbaristan and their controlling political party, the Northern People's Party, giving them control of all of the country except for the oil-rich province that is all that is left of South Azbaristan.

The Southern Azbaristan Democratic Front of South Azbaristan has only managed to hold off the North with the aid of the West, which supplies military and logistical aid to the tiny state in return for the oil exports from their vast reserves. Players will have the chance to assume the role of squadron leader Razor and lead the fight to reunify Azbaristan and protect the West's vital interests.

Licensed fighters? This should, at the very least, put to rest the school of thought which claims that if Electronic Arts is not interested in developing a new Wing Commander then they should sell or license the IP to another company. 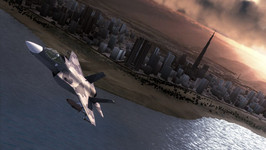 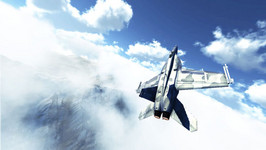 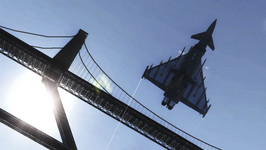 I'm a huge fan of the series, especially USAF, and Fighters Anthology. I'm actually saddened to hear the way that this is all going... Janes would never make up a fictitious land where we have a conflict that's for sure. But I'm sure it will be a pretty cool game. At least they're reviving the game series.

Sorry if it wasn't clear--it's not EA reviving the series, it's some super low budget lame-o company that bought the name.

Well hopefully it has more realism than HAWX.

The fictitious country part sounds quite lame. Its like they are combing a Middle Eastern country with Korea.
V

JasonRocZ said:
I'm a huge fan of the series, especially USAF, and Fighters Anthology. I'm actually saddened to hear the way that this is all going... Janes would never make up a fictitious land where we have a conflict that's for sure. But I'm sure it will be a pretty cool game. At least they're reviving the game series.
Click to expand...

What surprises me is that this fictional conflict is explicitly being fought over oil, against what appears to be the popular leadership of this war-torn country. Like if we combined propping up the hopelessly corrupt and unpopular South Vietnamese government with our disastrous war to secure oil rights in Iraq.

I wonder if we'll get to play as the communists or whatever the popular guys are.
J

16 mission story? For real? And let's see, if it's authentic and you get what, like 8 missiles per mission, that's like six minutes of combat game play per mission? An hour and a half of gameplay? How do they think they can pitch a war with that complex of a back story into just 16 missions?

Terrible, I'll stick with Falcon 4.0, thanks.

This just puts the epic ness of Wing Commander into perspective though - how many missions are there averaged between all the games? I'm going to have to go look. There is simply a huge amount of material available there.

On second thought now that I see it's a super lamo company reviving it. I will probably NOT be a purchaser

It is such a pity that there aren't any good flight sims anymore.

I still play Falcon 4.0, LockOn, IL2 and that's it. All of those games are several years old now. Nothing beats Falcon's realism, but only one plane makes it a bit boring after a while, and the graphics are... not that good. I would love a mix between Falcon 4.0 and LockOn.

What I "need":
- Realistic Cockpit with all the instruments clickable
- Realistic radar and weapon modes
- Halfway realistic communication (like in Falcon)
- At least three or four different planes to fly, and I'm not speaking of four versions of the same one.
- Aerial refueling (even better if there are different ways)
- Carrier landing
- Halfway descent graphics (i.e. LockOn's graphics or better)
- Mission editor

The only game in development that has all those things is "Jet Thunder". But I fear the scenario will suck. Not that I don't like the falklands scenario, it is something that wasn't used very much yet and that is good, but that landscape down there is rather boring and I don't want to fight mostly over endless oceans. I like to fly low over pretty mountains and rivers and towns and stuff.

I hope that game won't suck. But I fear it will.... I was very disappointed when HAWX was released. That wasn't a simulation, but an arcade game. Arcade games are great (if you like them), but HAWX was more like WC-Arena than like Falcon. I want it the other way round.
D

Hardcore flight sims are a dead genre, there's no mass market appeal for them anymore. TBH I don't think there was much of a market for them originally either. People were just happy to get their hands on anything with vehicles. Ever since vehicles got into FPS games the market for simulators has basically died. Games companies have moved on into the mass market chasing $100 million dollar titles. The only flight games still going have carved out their niche.

The X series for example have made their market by reselling the same game with better graphics year after year. It's like EA hiring a bunch of artists full time to keep making privateer 1 over and over with better graphics (except X gameplay sucks compared to privateer). The only area I've seen decent progress in flight games has been open source with stuff like flight gear. Or commercial sims aimed at military/gov/training (X-plane). Combat flight simulators have basically died. Most people willing to put time in to learn how to play/get joysticks etc are already pilots/want to be pilots.

The other big problem with the space/flight genre is lack of tools. Noone can edit levels in these games easily. Prophecy has what 5 projects? and those took people years to learn how to program/reverse engineer. Freespace 2 keeps going because it had a level editor similar in complexity to a quake editor and the tools for ships finally came out about 3 years after the game was released. Freelancer because it has text files/privateer online style gameplay. The closed source engines are all aging out of existance. Who wants to edit a game that looks crap compared to other stuff on the market? Vegastrike, Gemini Gold, and all the other free spaceflight games I've come across are dying for similar reasons. Modders don't want to edit games without graphical tools, without manpower these projects don't get the art people want to play with, don't pull developers and they die.

Looks like another classic gaming brand being trampled into the dirt

The demo video looked just like HAWX but with less action.

The dearth of good jetfighter simulations is perhaps a reflection of the changing face of global conflict today. Asymmetrical warfare on the ground marginalises the role of fast jets in real life, leaving the game designer with little choice to base their scenarios on. Having said that, it doesn't explain the lack of good helicopter sims as their role should still be very prominent...

This sucks. I have fond memories of Longbow, F-15, ATF, F/A-18 and WW2 Fighters. It really blows to see such a great series the thrown away like this.

It's not EA's brand to sell. Jane's is a real thing that predates Electronic Arts by a hundred years. "Joan's" in Claw Marks was a play on the name. EA licensed the ability to make games on behalf of Jane's in the '90s, but that's long since expired. http://defence.janes.com/

So is this the 'Project Redlime' we heard about a year or so ago maybe?

I reckon it bodes well for the Wing Commander community - anything close to the genre has got to be good. Will be interesting to see if it does well in retail.

So is this the 'Project Redlime' we heard about a year or so ago maybe?
Click to expand...

This game has nothing to do with EA... it's some budget gaming company that bought the Janes license.

ChrisReid said:
It's not EA's brand to sell. Jane's is a real thing that predates Electronic Arts by a hundred years. "Joan's" in Claw Marks was a play on the name. EA licensed the ability to make games on behalf of Jane's in the '90s, but that's long since expired. http://defence.janes.com/
Click to expand...