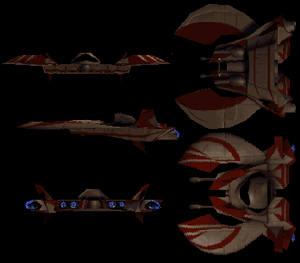 Development of the Jrathek was discovered in the late 2660s when Kilrathi scientist Hajjnah defected carrying plans. As a result, the Jrathek prototype was simulated in the Terran Confederation Space Naval Academy's Cyberschool's holographic simulator before it saw active service. Jrathek were serving with front line units by early 2669, where they were commonly used for reconnaisance missions. A Jrathek off the KIS Shiraak first located the TCS Lexington's vapor trails. The fighter briefly held a speed record as the fastest Kilrathi fighter.