The Fralthi II-Class Cruiser is a class of heavy cruiser in the service of the Kilrathi Empire. It is a successor to the older Fralthi-Class Cruiser.

The Fralthi II is a newer Kilrathi wartime design that entered service in the second half of the Terran-Kilrathi War. It is a massive warship bristling with guns and is capable of assaulting most other capital ships. Its main purposes include system patrol, capital ship interception, and planetary assaults. 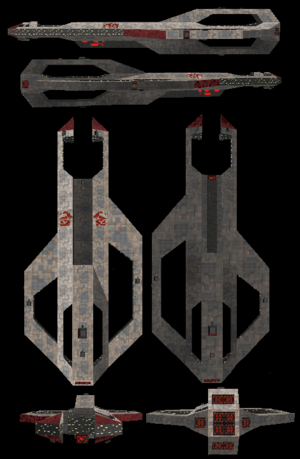 Famed war veteran Christopher Blair encountered a Fralthi II during his service on the TCS Victory in the Locanda System. One of his wingmen, Lieutenant Robin "Flint" Peters went AWOL and attempted to attack one of these cruisers without backup in order to avenge her war-torn home system. After a concentrated assault, Blair and Flint destroyed the cruiser and returned to the Victory, where Flint was reprimanded for her reckless assault.

Colonel Blair and his wing encountered another such cruiser during the Battle of Freya. One of the vessels escorting the Victory, the TCS Ajax, encountered a Fralthi II as it was sweeping up enemy forces in the star system and fought it in a one-on-one engagement. The Ajax came out as the victor thanks to Blair's assistance.

After the destruction of Kilrah in 2669, Fralthi IIs continued to operate during peacetime. At least one such cruiser was destroyed by the Nephilim in 2681 in the H'rekkah System after the Nephilim invaded the known galaxy. The cruiser was escorting a convoy and was destroyed in a futile attempt to defend itself. The TCS Midway sent a force of Terran Space Marines to investigate the remnants of the cruiser, only to find that the entire Kilrathi crew had been massacred and dissected.