It took just a few busy days of detective work for Wingnuts to solve the Standoff Easter Egg Challenge posed by Quarto last week. Plywood Fiend was the first to capture the screenshot below, and Blaster and Ilanin translated the Kilrathi text based on some key clues. The hidden message screen was found (spoiler) "on the flight deck, just after the final mission when all are gathered around your sabre. The Easter egg can be found by clicking one of the nearby barrels." (/spoiler) The uncovered egg is a coded message from Prince Thrakhath to the game's main character! Now how about that song clip that plays along with it? 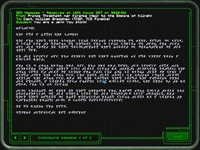 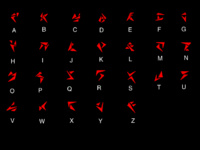 When creating this message, we made sure to provide a few "Rosetta stones" - the first sentence repeating the subject line, the "hahahahaha" bit, the "on my blood and name" phrase repeated from the letter in the KSaga manual, and finally, the Prince's name. There was plenty to go on - but even so, I didn't expect anyone to decrypt it that quickly. Well done!

Incidentally, since the fiction is stored as text files, this little easter egg required quite a bit of effort on our part - apart from creating the Kilrathi font, we also got Pete to create a basic encryption mechanism, to prevent people from taking the easy route and extrating the original text from the TRE file.

But now... you may ask - did we make up all those Kilrathi letters? No, we didn't - all we did was rescale them a bit from the source material. These are genuine Kilrathi letters as created by Origin. And, as always, you have Captain Johnny to thank - because an image of the Kilrathi alphabet was tucked away in the font-related materials on the WCP and SO backup disks. We're pretty fortunate that nobody ever looks at such dull things as fonts, because it meant we could use it for this easter egg . Now that our message has been decoded, though, I'm attaching the image with the original Kilrathi alphabet.

So... who's gonna drop by the Kilrathi language thread and work out what the Tomes of Sivar on the WCP intro screenshot really say? :)