Are you the sort of person who wants to devour every single precious word from Wing Commander novelist Dr. William Forstchen? Well, first, you're a strange guy... but you're also in luck, since Dr. Forstchen has written an essay included alongside a new graphic novel from IDW Publishing:

On May 21, 2008, IDW Publishing and Charlie Foxtrot Entertainment (www.charliefoxtrotfilms.com) will release their second co-published venture, the original graphic war novel Finding Peace. The book, which includes an introductory essay by New York Times best-selling author and military historian William R. Forstchen, has already received tremendous advance praise, such as the comments from BrokenFrontier.com reviewer Dave Baxter, who says of the new ogn, “If you’ve ever admired Maus or Persepolis or Pride of Baghdad, Finding Peace is the next step, a superior work that admirably finds its place next to these, and arguably surpasses them page for page.”

Check out the full press release here. A comic that claims to be the next step up from Maus and Persepolis sounds pretty sketchy... but it is from the company that brought back Star Trek! 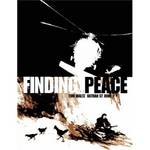