In addition to their 2654 Around the Verse episode, Roberts Space Industries also put together several silly ship options for April Fools day last week. The new 'Pisces' ship featured an unprecedented 10 variants including the Pisces Rapier II and Pisces Dralthi which look quite familiar! The Kilrathi ship comes from Howard Day and the Confed fighter is one of Klavs'. The hangar was also filled with schools of floating fish! 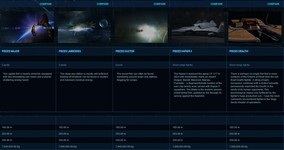 There is perhaps no single fish that is more symbolic of the Empire of Kilrah than the bat-finned Dralthi fighter. A string of early successes combined with a distinct silouette permanently imprinted the Dralthi in the minds of its human opponents. This psychological impact was furthered by the fighter's huge production run - it was the most commonly encountered fighter in the Vega Sector theater of operations.

The Rapier II replaced the aging CF-117 in 2654 and immediately made an impact: Dragon, Bandit, Maverick, Maniac, Prankster... a disproportionate number of the war’s top twenty aces served with Rapier II squadrons. The Blade is the modern version of that famed fish, updated by fire through its service against the Nephilim.