Herr Koos has scratch-built several impressive Wing Commander models. The high quality ships show off the time and effort he put into the designs prior to starting construction. The Banshee, Hellcat and Excalibur are hollow, and the more curvy Vampire is made out of solid balsa wood. 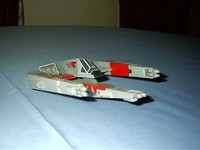 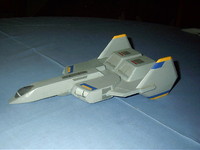 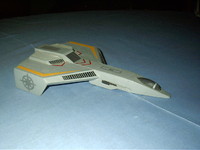 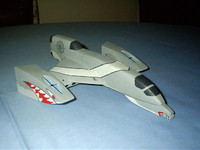 Let me start with a bit of background: I'm a long time model builder. I started off with plastic kits and I've since progressed to scratch-building my own designs from balsa wood. My collection includes five WC ships (which I'm quite proud of, I might add :) ). Building something from scratch as opposed to using a model kit obviously means you have to draw your own plans to work from. This involved hours of taking measurements from the game manuals, and even from in-game screenshots to get the look right.

Tom Wilson is still busy on the comedy circuit. The Maniac will be visiting a couple hot spots in the southern US this spring from February 4-7 in Alabama and March 4-6 in Kentucky. He's also just finished shooting a film called Yohan - The Child Wanderer. Here's why...

I just finished acting in a Norwegian movie called "Yohan - The Child Wanderer." It's being produced, directed, and acted by Norwegian actors, in Norwegian, with the beginning and ending set in the U.S., with a few American actors, including myself and Kris Kristofferson, who is Swedish, but got over his Norway-Sweden resentments to act as "Old Yohan." Why did I do this? Hey, who wouldn't want to be in "Yohan - The Child Wanderer" with Norwegian people? Besides, I'm big in Norway. Well, physically large, I mean, and they seem to like great big white people there, because they have lots of them. And easy to assemble furniture. I had better photos, but I liked this one that went wrong. Lit in the right way, Kris looks like a painting from the 17th century.