On Sunday we explained an elaborate set of in-jokes between Wing Commander and System Shock. Today we'll look at what is probably the most famous Wing Commander "crossover" -- the Bloodfang-class Superfighter which appears in Ultima VII: The Black Gate. It's not hidden - in fact, one of the game's famed side quests is based around the ship. If you have Ultima VII then you can find the fighter in the northeast corner of a wheat field due east of Britain. It's sitting out, readily visible:

If you click on the fighter, the game plays the Kilrathi Theme MIDI! You can download the Ultima VII version of the music here. Note that the SNES port of Ultima VII does not include the Bloodfang. Developers wanted to include the ship but were stymied by the SNES' memory limitations. When you talk to a nearby farmer, Mack, you learn the story of how he encountered the Kilrathi and the unusual series of events that followed. Here's a transcript:

You see a farmer with wild eyes widened in excitement.
"Avatar! Thou hast returned!" exclaims Mack.
Name: "I am Mack."
Job: "I am a farmer, though most folks just call me a lunatic."
Farmer: "On my farm I raise chickens and grow vegetables. If thou dost need work, talk to me!"
Lunatic: "Thou dost also think so, eh? But I tell thee what I say is true! There are creatures visiting us from another place in the stars! I have seen them!"
Creatures: "They are big mean ugly liontigers! Or is that tigerlions? They are ferocious and they want to eat us!"
Another Place: "All I can say is that there are certainly no such creatures in this world! Nor is their ship like any that has ever been seen anywhere in Britannia."
Seen Them: "With mine own eyes I have seen a star creature and the inexplicable conveyance which enabled it to travel to Britannia! I swear to thee! I am completely sane! I have proof!"
Proof (#1): "Go and look behind my farm in the middle of the field. Take a look for thyself and thou shalt see my proof."
Proof (#2): "I told thee I was not a looney! Didst thou see the proof?"
No: "Thou must go and look at what is in my field! Then come back here, for I must talk about this with someone who knows that I am not a looney!"
Yes: "Did I not tell thee that I am no loonie? Still, my story of how I did come across this thing is beyond belief."
Story (#1): "I like to stay up late. Sometimes I see bright lights flash across the sky. No one else ever pays them any mind. But one night I see this bright light come crashing down and it lands in my field."
Bright Lights: "I always watch for moving bright lights in the night sky. That is part of why people in the town say I am a loonie. But is what I do so different from what they do in the orrery?"
Lands: "After the explosion and crash I ran out to my field. There I saw the strange machine that thou hast seen, only it was glowing hot. I was terrified. But then the top of the machine started to open."
Machine: "It resembled a bird, but it was not a bird!"
Open: "I could not move from the spot as I saw the strange ship open. From out of the top came the vicious tigerlion. There was a savage hunger in its eyes."
Hunger: "In other words, it looked like it might eat me!"
Tigerlion: "It came at me like a predator comes after prey. It was so fast that I could not even move. I thought I was going to be killed for certain. It reached me in a second. It looked into mine eyes, and then it died."
Died: "What it and I had failed to notice was that I was holding mine hoe. It had once been accidentally enchanted by a passing mage, and it works wondrously in the fields. I use it for everything! The tigerlion had run itself through upon it. As it died, the thing spoke."
Spoke: "It said two words. "Kill Wrathy." I do not know who this Wrathy person is, or why the tigerlion wanted me to kill him. But I do know I sure get worried now whenever I see moving lights in the night sky."
Hoe: "I am sure thou dost know about the plague of looniness that has come to afflict all of the mages in the world. It was several years ago that I brought my broken hoe to a mage called Mumb. Fixing things was all he was good for anymore. There was also some fighter who wanted Mumb to enchant his sword, turning it into "The Sword of Death". It appears poor Mumb got confused and that fighter came back and killed him because the man wound up with a sword that was only good for cutting weeds. I could never figure out exactly what happened. It appears that old Mumb made mine hoe into the Hoe of Destruction! Unfortunately, the hoe is lost."
Lost: "Well, 'tis not really lost. It is locked up in my shed. It is the key to the shed that is lost! I think I might have accidentally used it as a fishhook when I was fishing on the banks of Lock Lake. So now I cannot get into my shed. One would think I -am- a looney!"
Kill Wrathy: "I am quite certain that was it, or something like that. Anyway the tigerlion itself proved to be quite delicious."
Story (#2): "I have been looking every night for another sign of those things but I have not seen any since that last time I told thee about it."

Thrak'hra: The Other White Meat!

Those Not of the Blood

... must have their blood spilled. Or, so translates the Kilrathi: Va ka garga ka naru ha garga. Though it may not have fared well against the Hoe of Destruction, the Bloodfang was decidedly Kilrah's finest. The Bloodfang-class Superfighter first appeared in the non-playable Wing Commander II Demo (available here). Prince Thrakhath flies a Bloodfang - rendered in WC1-style graphics - to deliver news to the Emperor.

The fighter appeared again in Wing Commander II, again in the hands of the Prince. You encounter the ship only once, in a one on one dogfight against Thrakhath at the end of the game -- either in K'Tithrak Mang D or Gwynedd (2) D. The Wing Commander II version is identical to that which appears in Ultima VII.

The Bloodfang appears a third time in Wing Commander III, significantly redesigned with the modern 'non-symmetrical' approach to Kilrathi fighters. This time around you see them twice: when Thrakhath taunts you with Angel's execution at Torgo 3 and then again in the game's penultimate dogfight at Kilrah 3.

The fighter received its name in Wing Commander 3, as well. While Wing Commander 2 refers to the fighter as Bloodfang internally, the name was not entered into the continuity until it appeared in WC3. It was not spoken in dialogue until the release of WC3 3DO, which restored a missing 'news brief' segment about the fighter (available here). The Bloodfang also appears as a rare WC:CCG card, representing Blood Most Noble Squadron (motto: "The Emperor's Chosen"). You can see a complete set of specifications for both Bloodfang variants here. 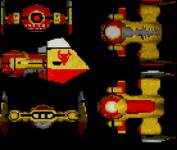 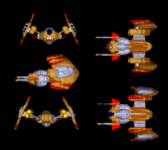