Four months after his last development which brought Proving Grounds to the internet, HCl has pulled off yet another miracle. He has managed to get Armada's NetBIOS multiplayer support working through DosBox. The result is that for the first time, Armada's strategic campaign mode is playable online! There are still a few bugs to squash, but hopefully there will be a fully playable release soon.

Regarding the gameplay improvements, to make the game more tolerant to lag... well, there may not be much that can be done, as the game insists on synchronizing everything. However, IPX code was slightly changed in DosBox CVS, which may or may not help things slightly in the end. I am still looking into those synchronization errors we encountered during testing a while back, these i might be able to solve.

Slightly off-topic news regarding NetBIOS coding: although my priority is Armada first and foremost, i think i am close to running Syndicate: American Revolt (a few more NetBIOS functions need coding). These may be good news to other retro gamers out there who look forward to challenge each other in this classic Bullfrog game :-) 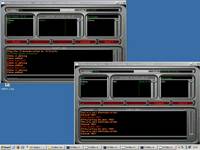 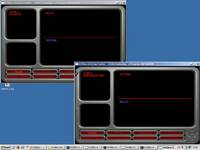 Space: Above and Beyond is a sci-fi show from the mid-90s that is pretty popular with our Forum members. It finally came out on DVD this week -- selling for $39.99 at Best Buy. After a period of exclusivity it should show up at other retailers. TVShowsOnDVD.com is good for keeping track of what shows are coming out on DVD. MacGyver is up to Season 3!

FROM "THE X-FILES" PRODUCERS GLEN MORGAN AND JAMES WONG.

It's the year 2063. After 150 years of deep space exploration, people on Earth feel certain they are alone in the universe. Everything changes when news comes that two outposts light-years away from Earth have been attacked by an alien civilization. Now the new young recruits of the United States Marine Corps Space Aviator Calvary are headed for the front lines in the toughest battle the world has ever had to face. Thrust into an intergalactic war, these untested fighter pilots suddenly find themselves waging a life-and-death struggle to protect Earth and to save mankind from total annihilation.