The Washington Post (or more specifically, their Launcher video game section) has run an article about video game franchises they'd want raised from the dead. Wing Commander gets top billing as their first series on the list, which is always great to see! Since this is Halloween-themed, each game also gets a small piece of zombie artwork. In WC's case, there's a disembodied hand on a joystick with a familiar reticle superimposed on top. You can check out the full article here. 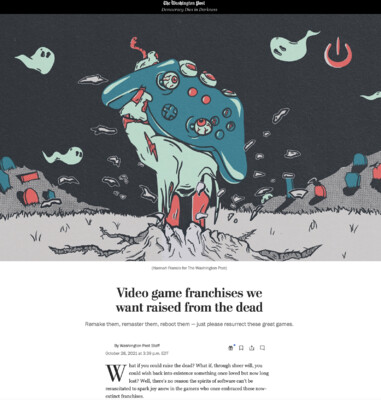 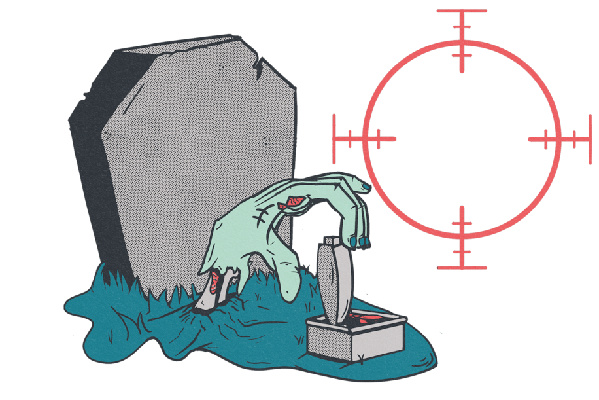 We all know Mark Hamill once saved the universe while waving a lightsaber in a galaxy far, far away. But did you know he also saved Earth by dropping a tectonic bomb on the war-hungry planet of Kilrah? Then he followed up those heroics by staving off a civil war through exposing the plans of a warmongering admiral played by Malcolm McDowell, whose character’s motivations preceded those of Call of Duty’s similarly minded General Shepherd by 13 years.

Wing Commander, a series that debuted on Microsoft Disk Operating System in 1990, helped shape space simulators and evolved into one of the most immersive, interactive sci-fi experiences with the release of “Wing Commander III: Heart of the Tiger.” The third entry into the series pivoted away from the pixelated space fights found in the first two games, replacing them with polygon-rich battles bookended by interactive, live-action video sequences that featured a branching plot with RPG-like decision-making. Hamill played the lead as Colonel Christopher “Maverick” Blair, the commander of a space fighter squadron in the final days of an enduring war against the Kilrathi, an alien race of catlike bipeds for whom war and conquest is sport.

The mainline series extended to five games, culminating with “Wing Commander: Prophecy” in 1997, but also produced numerous spin-offs. Those included the open-ended, open-galaxy “Wing Commander: Privateer,” in which players could play the role of a mercenary, trading, taking on contracts or pirating while totally ignoring the main plot, if so desired. Bethesda’s much-anticipated “Starfield,” releasing in 2022, figures to be a good approximation of that same “go wherever the solar winds take you” experience. Chris Roberts, who created the Wing Commander series, now has a new space-based MMO called “Star Citizen,” currently playable in its alpha state. — Mike Hume
Click to expand...