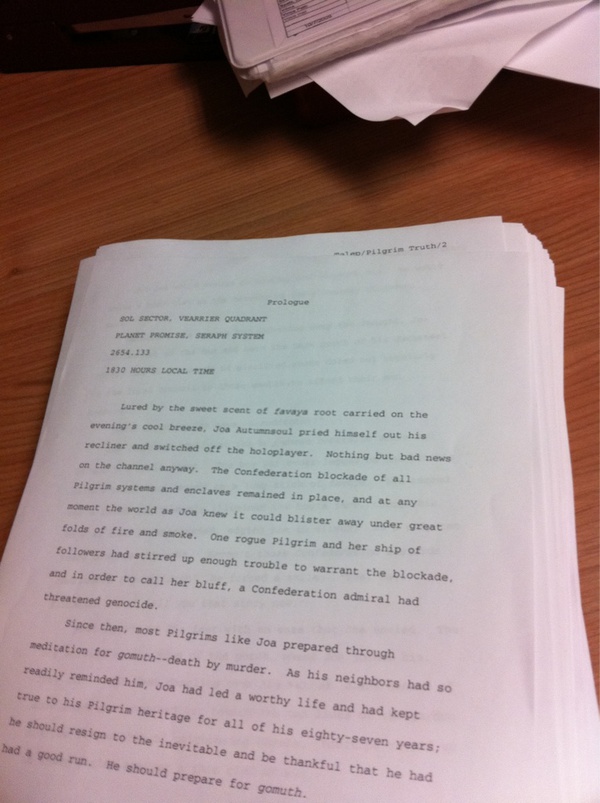 That is a beautiful sight indeed!

Awesome! Now scan the next 652 pages!

...just kidding. There are probably some serious legal issues there.

That would be too much of a tease! After ten years of trying to work out the legalities we have clearance to post the book.

Yeah, if it's not obvious, that's a printout, not a primary source document.

Can someone help me figure out what this is??

If you look at the top, you can see Page 2 of Pilgrim Truth by Peter Telep. It's a WC Movie era novel.
M

Awesome, now to read the other two novels again!

Wedge009 said:
If you look at the top, you can see Page 2 of Pilgrim Truth by Peter Telep. It's a WC Movie era novel.
Click to expand...

More specifically it's the third Movie tie-in novel. It was commissioned at the time of the film and then never released, though we do have a summary of it here somewhere at the CIC. It would have essentially completed the Pilgrim story and removed them all but completely from the WC universe (at least in terms of relevance).

The movie novelization reads a lot like the script, but it has a couple of notable additions. Most important (in this thread) is an epilogue which sets up the second story "Pilgrim Stars." Pilgrim truth essentially ends the Trilogy of movie novels.

I apologize for the delay, I had a strange weekend.

Yes--this is Pilgrim Truth and we have it. HarperCollins couldn't do it, Baen couldn't do it... but I am proud to announce that WCNews is going to release this novel, fully authorized by Electronic Arts.

Let me begin by thanking Peter Telep. I can't thank him enough, really. He's a man who bothered to do his research and make sure his novels were faithful to the games even when Chris Roberts was saying not to bother. He's a man who stuck with our community through thick and through thin annd more than that he's a man who held onto these computer files for the TEN YEARS it took me to work out a deal for their release. Mr. Telep, whether it's tank warfare or emergency room dramas, I will continue to buy every book you ever write as long as I live.

What is Pilgrim Truth?

Pilgrim Truth is the tenth and hopefully not final Wing Commander novel.

In 1998, HarperCollins Publishers licensed the Wing Commander movie and commissioned five books: two novelizations (a regular and Young Adult versions), a 'fact book' (the Confederation Handbook, from the IMGS team that created the game manuals) and two 'continuity' novels which would be released in the year following the film and continue the movie's story. Peter Telep was contracted to write all four novels. Book publishing of this nature has a lead time of several months: the movie novel needed to go to print months before the film game out--and both continuity novels needed to be ready well before box office receipts were in.

The movie novelizations were released in March, 1999 to rave fan reviews but the first followup book, Pilgrim Stars, came out with a very small print run in September. Very little care taken in its presentation: the cover reused the movie poster and the editor's description was insane. Still, the plan at the time was to release the third book, Pilgrim Stars, within HarperCollins' one year contractual deadline.

It didn't happen. We can't say for sure if the movie's failure killed the book or not... in fact, the entire imprint responsible for publishing movie books, HarperEntertainment, was closed before the book was to be released. The manuscript, which concludes a major cliffhanger at the end of Pilgrim Stars and generally removes the 'Pilgrim' concept from the Wing Commander mythos, reverted back to Peter Telep and it didn't seem ilkely he would be able to legally release it.

Let me pause to stress one thing: if you haven't read the movie novelization because you didn't like the movie then you are missing out. Peter wrote the book before he saw anything from the film itself, as publishing such things erquires... so he used Wing Commander I, Claw Marks and my brain for reference. It's full of Wing Commander continuity, probably more so than any book since Freedom Flight (to my knowledge only Mercedes Lackey, Ellen Guon and Peter Telep actually played Wing Commander before putting pen to paper).

Now you folks know I've done my share of work for Electronic Arts over the years--from the CIC initially being run on Origin's servers to a dozen cancelled games to a few that made it out, like Wing Commander Arena and the upcoming Wing Commander rereleases. When Chris Roberts wants a picture of himself from 1991, I'm there. I don't know if you've figured out my particular brand of craziness yet or not, but I can't see myself charging for any of this. I'm not a professional, I just love Wing Commander.

But you know what I do try to get out of these people over the years, every time? Every producer or creative director or Wing Commander God I've ever talked to should be able to confirm that I've asked for the right to release Pilgrim Truth online. Peter Telep had saved the book for us but wasn't willing to do it without a guarantee that he wouldn't be sued... and I didn't want to do it if it wasn't going to be part of the Wing Commander canon. So we fought and fought and fought with EA. Their legal department didn't want to spend money drawing up a contract for something that they weren't going to sue over in the first place and Mr. Telep didn't want to risk his writing career giving us something for free... which was completely understandable. So there was a stalemate.

I can't tell you why or how or whereabouts yet, but Electronic Arts has drawn up the paperwork and given us permission to post the book. I forwarded their e-mail to Peter and in ten minutes I was looking at a zip of eleven year old Word files. The man has been as ready to pass the thing off to us as we have been eager to get it.

We're going to release the book online. Peter has asked that we do a copyedit (since Harper never got there) and format it in a pleasing manner for reading on the internet--we're going to have a cover made up, create a special website and put together some chapter graphics. It's going to be swell--look for it soon!

A HUGE thanks to Mr. Telep and EA for finally letting the cat...err sorry...Pilgrims out of the bag!

While other older franchises are blowing themselves up with arguments (and torrenting the games they love so much??) the CIC has continued to be the greatest fan site ever.

October is going to be an exciting month for WC fans...just like playoff baseball....it only gets better!

this is one of the most exciting things I can remember happening that I have been (even peripherally) associated with. too cool for words!

Congratulations to Loaf and Peter for all of the work that they put into this project.

The WC community is simply the best one out there. I really look forward to reading this, although I haven't read the other movie tie-in books yet (they didn't come out where I was living at the time)

I remember eight or nine years ago over burgers at Dave and Busters the great Joe Garrity introduced me to the idea of 'grails'--those items that you want more than anything to find, as impossible as it seems. We'd talk about how we wanted to find Mount Drash or the Origin Audio CD and the like... and more often then not we'd luck or Paula into those treasures.

Soon after I made a list of the holy grails I wanted to recover for the Wing Commander community--things that seemed impossible to me at the time. As best I can remember:

Quite inspirational! And congratulations on your achievement. What a great year it's shaping up to be for Wing Commander...

I remember the disappointment way back then, when we knew Pilgrim Truth had been written, but wasn't going to be released. Congratulations and thank you to everyone involved in this endeavour.

Online is of course great as is, but would it actually be possible (legal and ok with Peter Telep) to get the book in some physical format (print on demand or somesuch)? Just curious.