CMDBob has taken his colorful Hornet and repurposed it for the flight sim Sky Rogue. The developers of the game describe it as a "simple, accessible-yet-difficult, fwooshy, 'feel good' arcade flight simulator," which makes it a great fit for Bob's models! The art style is light and it looks like some really fun way to kill some time. Sky Rogue players can grab the Hornet skin at the Steam Workshop here. Click the second through fifth images below for fast-paced animated gifs of the ship blowing stuff up! 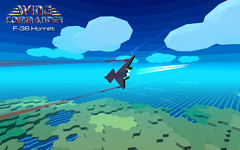 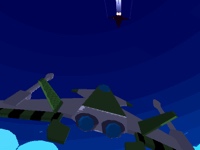 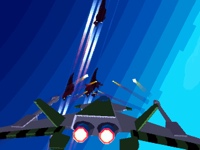 The classic F-36 Hornet light fighter from Wing Commander appears in Sky Rogue. For best results, put any gun type weapons in the right weapon slot, and use the WC1 Skin.

"Blow things up over land, sea, and air, on an infinite number of procedurally-generated islands. Choose one of a diverse set of aeros and kit it out with a dizzying array of weaponry."
Click to expand...

I actually bought in during the pay what you want deal they had... I think about a year ago. It's a neat little mashup of Ace Combat and a roguelike, if those terms mean anything to you. If not: It's an arcadey flight game with ridonculous numbers of missiles on your plane, with randomly generated levels and only one save file -- if you die, you start over at level one, and I think you lose certain unlocks if you're carrying them. I haven't played it much because they didn't get joystick support working until after the Steam release, which was quite a while after I bought the game. It's still in active development and a very early state, though, so that's not necessarily a sign of the quality of the game or its support, just a sign of how early I bought the stupid thing.
You must log in or register to reply here.
Share:
Twitter Reddit Pinterest Tumblr WhatsApp Email Share Link
Top